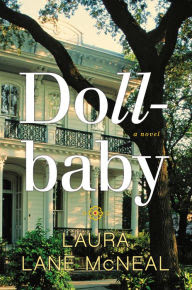 When Ibby Bell’s father dies unexpectedly in the summer of 1964, her mother unceremoniously deposits Ibby with her eccentric grandmother Fannie and throws in her father’s urn for good measure. Fannie’s New Orleans house is like no place Ibby has ever been — and Fannie, who has a tendency to end up in the local asylum — is like no one she has ever met. Fortunately, Fannie’s black cook, Queenie, and her smart-mouthed daughter, Dollbaby, take it upon themselves to initiate Ibby into the ways of the South, both its grand traditions and its darkest secret.

For Fannie’s own family history is fraught with tragedy, hidden behind the closed rooms in her ornate Uptown mansion. It will take Ibby’s arrival to begin to unlock the mysteries there. And it will take Queenie and Dollbaby’s hard-won wisdom to show Ibby that family can sometimes be found in the least expected places.

Dollbaby is a book that I started one morning and by the next morning I was finished.   I could not put it down.    The characters are so relatable, lovable, and people I cared about by the time I was done reading about their lives.     I felt like Laura Lane McNeal created characters that could be my friends, she let the reader learn about the characters personal lives, their real feelings, and their real fears.

Dollbaby is set in New Orleans right before the Civil Rights Act was passed in 1964.    Queenie and Doll are the maids that come with the house that Frannie lives in.  While Queenie believes that this act will not mean anything, Dollbaby wants to step out and fight for her rights.   It is not an easy life for white people or black people.    There is a lot of violence, especially in the south.  I believe that both races are trying to come to terms with where the world is heading.   I enjoyed that both Ibby and Frannie, the white people, seemed to understand the Civil Rights Act and know that it was going to be a big change in the world.

Ibby, Fannie’s 12 year old granddaughter, is dropped off at her grandmother’s house by her mother and never picked back up.   I felt for Ibby’s rejection by her mother.   This is a tough subject at any age much less as a teenager.   She was left in a town she was not familiar with, with people she did not know, and she was thrown into a world so different from what she knew.

I felt that this was a great read.  It was not always an easy subject to read about but the book was easy to read.    The history, the characters, the setting were all perfect.

Laura Lane McNeal grew up in New Orleans where people laugh a lot, talk with their hands, love good music, good food, and will make up any excuse for a party. After receiving two undergraduate degrees from Southern Methodist University, she went on to earn an MBA from Tulane University. DOLLBABY is her first novel. For more information, please visit www.lauralanemcneal.com or follow Laura @llmcneal.

What others are saying...

“Don't be surprised if you see McNeal's book in a lot of beach totes along the Gulf Coast this summer.”—New Orleans Times Picayune
“When someone asks you for a great book to read, usually you pause and think about genre and authors and then give a few options. But every now and then there’s a book you tell everyone to read, because it is that good. DOLLBABY by Laura Lane McNeal is that book.” —Durham Herald-Sun

“McNeal's witty prose and expertise on all things New Orleans will enrapture readers of The Help and Divine Secrets of the Ya Ya Sisterhood.”—BookPage

“Beautifully rendered and perfectly paved, DOLLBABY is one novel this year not to be missed, with just the right amount of mystery mixed with coming of age drama.”—Book Reporter

“McNeal’s DOLLBABY is such an impressive debut—a powerful roux of family drama, long-simmering secrets and resentments, and ultimately, forgiveness and redemption. Deeply evocative, with memorable characters, DOLLBABY belongs on the keeper shelf along with The Help and The Secret Life of Bees.”
—Mary Kay Andrews, New York Times bestselling author of Ladies’ Night