Afghanistan: On the Bounce by Robert L. Cunningham and Steven Hartov 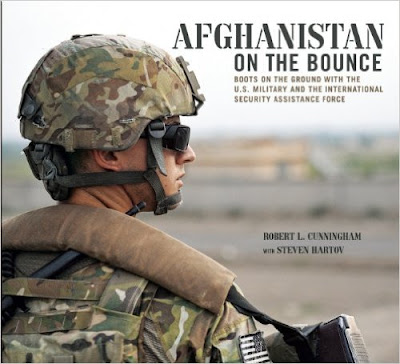 What was it like to serve in Afghanistan? That is the question civilians often ask returning servicemembers of the armed forces. Afghanistan: On the Bounce brilliantly conveys the full range of the troops’ experiences—on patrol, in combat, in the chow line, and in religious services—through photographs, stories, diagrams, and removable ephemera.

As a documentation/production specialist in Afghanistan, photographer Robert L. Cunningham accompanied soldiers of 40 different units on 132 combat missions, following them during their typical on-base routines as well as into hazardous situations. Here are detailed examinations of the servicemembers’ weapons, uniforms, vehicles, and gear, along with reflections on duty, insights into valor and heroism, and clear-eyed humor about life on deployment

I always thought adult picture books were just for coffee tables.    They were not for really looking at, they were just to look pretty.    I was partially right.     This picture book is beautiful but it is so much more.    It is for looking at, for reading, and for learning more about a war that has affect every person in some way.

One of my favorite genres to read about is fiction war stories, they may be fiction but they still hold some of the truths of war and that of coming home.     Afghanistan:  On the Bounce showed me exactly what I had been picturing in my mind as I read other military books.   The pictures in this book bring me right into the action, into the world of the soldier’s life.    I loved the commentary throughout the book as well.  It gave a description of what I was looking at and what the soldiers could experience while in the picture area.      I felt like I finished the book with a better understanding of their real life experiences.

Robert L. Cunningham is a still photographer who has carried his cameras in over 24 countries around the world. In 2011, he began working as a war correspondent. With multiple combat embedments spanning from 2011-2014, Cunningham worked throughout Afghanistan, primarily beside the U.S. Army’s 1st Infantry, 10th Mountain, and 101st Airborne Divisions. He started as a photojournalist with his work appearing in multiple national and international publications and broadcasts including: National Geographic, ABC, BBC, Business Insider, CBS, Fox News, Huffington Post.

What others are saying…
“Afghanistan” On the Bounce should be a go-to book for families, particularly those with young children whose parent(s) is, or will be, deployed. By providing graphics and detailed descriptions of equipment, such as an MRAP and AH64 Apache, as well as weapons and uniforms, this book is an informative tool, offering a sense of base knowledge and understanding for all ages.”
—Jennifer Benitz, Army magazine

“It’s a book that will enthrall readers from the first page to the last image and cause them to start all over again.”
—A Soldier’s Perspective