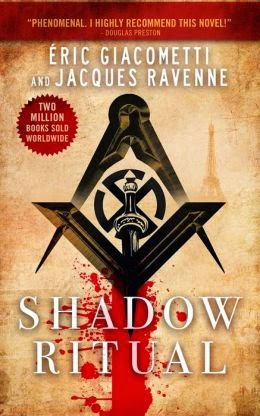 An electrifying thriller about the rise of extremism. Two ritual murders—one in Rome and one in Jerusalem—rekindles an ancient rivalry between modern-day secret societies for knowledge lost at the fall of the Third Reich. Detective Antoine Marcas unwillingly teams up with the strong-willed Jade Zewinski to chase Neo-Nazi assassins across Europe. They must unravel an arcane mystery, sparked by information from newly revealed KGB files. Inspired from the true story of mysterious Freemason files thought to hold a terrible secret, stolen by the SS in 1940, recovered by the Red Army in 1945 and returned half a century later. First in a hugely successful series that has sold over 1.5 million copies in France and is translated into seventeen languages.

1.      How did the two of you come together to write SHADOW RITUAL?

Many things led us into this adventure. First of all, Jacques is a Freemason, and Eric had investigated scandals linked to freemasonry. We had two different visions of this brotherhood. Second, Eric had already written a mystery and his French publisher was encouraging him to write another one. Thirdly, we had known each other since our teenage years together spent in Toulouse, in the south of France, when we shared a passion for esoteric mysteries and secret societies. At the time, while others were flirting, we were exploring Cathar castles and Templar outposts, certain we would find some lost treasure, perhaps even the Holy Grail. We always kept a bit of that feeling of wonder. All of this came together with the idea of a Freemason inspector. Two other inspirations fed Shadow Ritual: the little known story of Freemason persecutions in Nazi-occupied France, and the true story of French Freemason archives stolen by the Nazis in 1940, recovered by the Soviets in 1945 and only returned to France in 2000. What secret did they hold?

2.      How does the fact that Jacques is a Freemason and Eric is a Profane affect the portrayal of the relationships between your characters?

It gives us a more balanced view of freemasonry: one that is not too indulgent and not too full of fantasy.

3.      What was the inspiration for the characters Antoine Marcas and Jade Zewinski?

Antoine embodies an upright Freemason who believes in his ideals, but is aware that the brotherhood is not perfect. He is always doubting, and that is his strength. Jade is hostile to freemasonry and challenges Marcas, by asking him all the questions the Profane have about this secret society.

4.      The Inspector Marcas series is an international phenomenon! Has the success of the series changed your life?

The success of the series has allowed us the freedom to write and earn a living from it, which is a real luxury.

5.      How did you decide to write a series with a freemason as the protagonist?

We though thrillers are an excellent way for readers to discover the world of freemasonry. Then, we were doubly lucky: at the time, nobody in France had had the idea of creating a positive Freemason protagonist, and Dan Brown published his Da Vinci Code a year before we brought out the first Antoine Marcas mystery in French. We were the first French authors to benefit from the Dan Brown effect.

6.      SHADOW RITUAL deals with actual Freemason history and the potential implications of a breach; has SHADOW RITUAL ruffled some feathers?

At first, Jacques’s brothers were a little thrown off. But over time, freemasons have become fervent supporters of Inspector Marcas. The rituals and meetings described in the books are genuine, and readers can understand a little bit more about the brotherhood.

7.      How much research do you have to do, which are the most difficult types of scenes to research, and have you ever had to go to extreme or unusual lengths to research a scene?

We spend a lot of time in libraries, often in Freemason libraries, which have many rare books. We also meet with scholars. This is a fascinating part of the work, but it’s important not to get lost in the research or to recount too much of what we found in books. The hard part is building a plot and adjusting the mechanism to work like clockwork.

The Black Swan by Nassim Nicholas Taleb, a fascinating book about the unforeseeable events that change the destinies of nations.

9.      Who or what has influenced your style of writing?

Jacques’s influences are very literary, as he was a French professor and a Paul Valery scholar. Eric’s are more thrillers (both books and movies).

I’m heading to New York for Thrillerfest in July. I can’t wait to meet other thriller writers. And next year, there will be another Antoine Marcas thriller in English, one with surprising Freemason information about the Statue of Liberty and the Eiffel Tower.

Las Vegas in August to celebrate my son’s twenty-first birthday, and shared impatience with Eric for the next Marcas adventure.