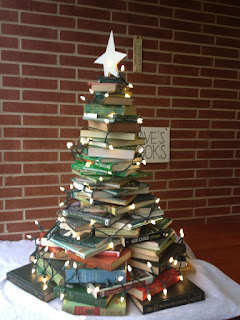 I met Christina George with her Publicist series.   Since I've read that series, I have never passed on reading any of her other books.     She writes fun and easy books to read with characters that are easy to relate to.    She just put her Christmas series to Amazon and I recommend reading them all. 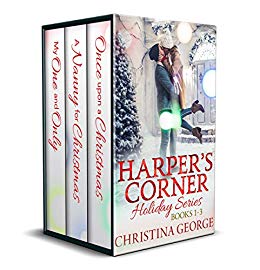 Fall in love with this sweet, funny, and sexy series. Welcome to Harper's Corner, a small town brimming with love and stories just waiting to be told. Purchase your copy on AMAZON
Three books included with this bundle! 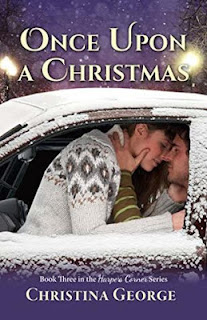 Once Upon a Christmas

Is it ever too late for happily ever after...?

Callahan is one of the hottest guys to move into Harper’s Corner in a long time, partly because he’s also a complete mystery.

He keeps to himself and leads a quiet life, rumors swirl around that he used to be in the military...but no one knows where he came from, or what brought him to their small town.

When Stevie’s parents have a health crisis, she’s forced to take leave from her very New York existence: including a high-powered job at a big publishing house and explosive sex life with her wealthy, handsome and appropriately pretentious boyfriend, to step in and ensure the preservation of the family’s longstanding bookstore.

With the first order of business being to fire Callahan, the unqualified shop assistant her dad hired.

Though as many women from Harper’s Corner can tell you, things change when you come back home.

So firing this attractive, brooding, secretive man turns out to be much harder than she originally planned…

And when his past comes back to challenge him, he can’t keep hiding from what happened. 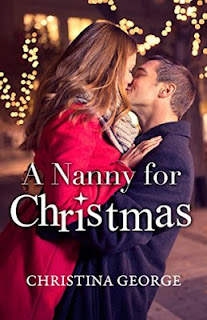 A Nanny for Christmas

In less than 8 hours Willa went from being a behind-the-scenes nanny for one of the hottest A-list celebrity couples, to having her picture splashed all over every magazine in the country.

Caught in the arms of her sexy employer, Johnny Blaze.

No one cares that Johnny hit on her, and she repeatedly told him no.

Humiliated and desperate to get away from the harsh eyes of Hollywood, she decides to take a short break from her suddenly not so glamorous life and head home for the holidays.

But a quiet Christmas to recoup before heading back to LA wasn’t in the cards.

She immediately runs into Jack, her seriously hot, fireman ex-boyfriend.

Despite Willa’s attempts to keep a low profile, she and Jack are thrown together for a Christmas charity project -- making her wonder if she’s meant for a simpler life in Harper’s Corner after all. 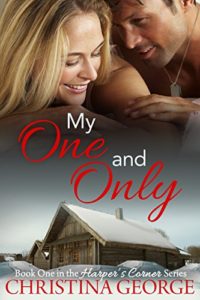 My One and Only

Five Years Ago She Was Left at the Altar

Five years later…Jessica Monroe has moved on with her life in Harper’s Corner, and her fabulously successful bridal business. She has her friends, and her comfortable life in one of America’s most beautiful small towns. What more could a girl possibly want?

Matthew Larson is roguishly handsome and happily enlisted in the Army. He lives for two things: serving his country and Jessica Monroe. He’s loved her for years, long before she was engaged to his arrogant and self-absorbed brother Will.

When Will left her at the altar, Matt was there to comfort her, as much as an almost brother-in-law was allowed, before he deployed to Afghanistan.

They were almost family so Jessica kept in touch, but little did she know how hungrily Matt would read each email. She was his escape from the horrors of war and a reminder of a simpler life that awaited him back in Harper’s Corner.

When Matt finally returns Jessica is taken aback by a rush of emotions - suddenly faced with the reality that she nearly married the wrong brother.

About Christina George
I’ve worked in publishing for twenty years and I sincerely love books and authors. I started this journey with my own books planning to write just one, and then well – all I can say is the stories kept coming. My original series The Publicist, follows Kate, Mac, Nick, Vivienne and a host of other awesome characters as they make their lives in New York, amidst the chaos that publishing often brings with it.
I am now exploring a fictional small town called Harper’s Corner. This series is so fun, because there are so many characters in this town, from sexy firemen and hot Army guys, to an awesome group of women that I affectionally call “the coven.” These books will explore each of these characters, and their journey to finding the loves of their lives.
I love writing, and I love reading and if I’m not actively writing a book, I’m probably dreaming of what I’ll write next.
Please click here to follow me on Amazon Author Central for my important release updates and personalized recommendations for other fabulous books to read by talented romance authors!