If you are looking for a wonderful paranormal author Sherry Soule is one that I'd recommend.    She has such a talent for taking a pretend world and bringing it alive.   Her characters become people you feel like you know and the settings become places you feel like you are visiting.    I have read many of her books and love her series, which should be read in order.


Sherry's Charmed Chronicles Series is one of my favorite by her.   Check out the series below. 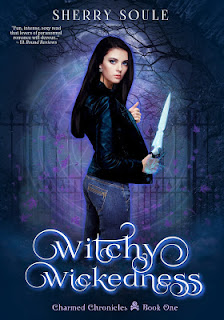 •*¨*•.*.•*¨*•
Ravenwood, California isn’t like other coastal towns. It’s a mystical place built over a gateway into Hell, with some extremely unusual residents. And Shiloh Trudell isn’t like other girls—she’s a teen witch who can sense the things that go bump in the night.
When Shiloh gets a visit from a shadowy demon threatening to steal her family’s spellbooks, her life quickly spirals into one of unending weirdness and danger. As if life isn’t complicated enough, she takes a job at the local haunted house, where she meets the sinfully hot Trent Donovan with massive amounts of swoon-inducing charm. With his insanely green eyes and a crooked smile, Shiloh can’t deny the red-hot chemistry between them.
Yet Shiloh’s forced to put romance on hold to embrace her destiny as guardian of the Charmed Chronicles. That is, if she can evade a kooky ghost on a revenge haunt, contain the scary dark power tainting her magick, and survive attacks by a pack of creeptastic demons first.
For poor Shiloh, life’s a real witch.
Will she gain the courage to face all the monsters in Ravenwood, and become the hero she was destined to be?

Purchase your own copy at Amazon 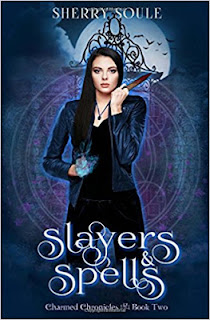 Something wicked and deadly is brewing in the haunted seaside town of Ravenwood...
And only demon butt-kicking, extra girl-powery, and magick-slinging Shiloh Trudell can stop all the wrathy badness. Now that she's been tasked with protecting the sacred Charmed Chronicles, she's being hunted by the deadliest spawns of Hell. Even though fighting the forces of darkness might be her sacred duty, for Shiloh, it feels more like a suck-tastic curse.
With vampires skulking in Ravenwood, Shiloh's not only battling the undead, but also her extreme attraction to the muscular and hunky, Trent Donovan, and the smoking hot yet mysterious Raze. Except, she has bigger issues to deal with than cute boys, like restraining the demony essence that's infecting her magick, and stopping an ancient evil from starting the apocalypse.
Despite all the demonic drama ranking high on the witch-o-meter, they pale in comparison to the shocking truths Shiloh will uncover in Craven Manor. Dark secrets that could shatter her world...or possibly end it.
But will Shiloh be strong enough to slay a multitude of immortal foes and save the world?

Purchase your copy at AMAZON