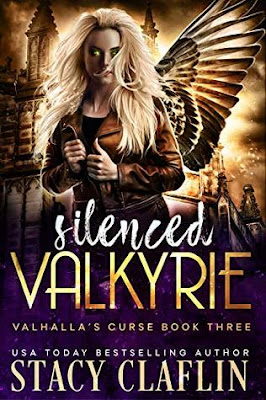 A Valkyrie’s work is never done.

At least, Soleil’s work isn’t. And her to-do list is growing.

As one of Valhalla’s most lethal assassins, she’s tasked with vanquishing a terrible dictator on earth. But her association with a pack of supernaturals has put her behind schedule, which has caused the high council of Valkyries to target her for retribution.

She intends to retrieve the dictator’s soul then bargain for her life and freedom when she discovers her boyfriend has been abducted—possibly by agents of Valhalla. Before she can find him, rogue Valkyries confront her and offer her a bargain. If she’ll complete their missions, they’ll help save her parents.

Soleil didn’t even know they were in jeopardy.

Now she has three humans to hunt, a boyfriend to find, and parents to save—all while avoiding a violent pack of Valkyrie hunters and the dangerous agents of Valhalla itself.

And she had hoped to retire soon.

Instead, she sets off on a clandestine mission with global implications. She crosses paths with vampires, werewolves, mesmers, Valkyries, hunters, and witches. But there may not be enough supernatural power in the world to right all the wrongs, save all her loved ones, and earn Soleil her freedom.

Silenced Valkyries is the continuation of the first two books in the Valhalla’s Curse series by Stacy Claflin.   They must be read in order as each book starts off exactly where the book before it ends.

With this book Tritan is locked away in a jail, Soleil is desperate to find him, and the rest of Soleil’s non-family is wanting to help her with the missions, with finding Tritan, and anything else she needs help with.   Soleil has to learn to accept that help, it would just make her life that much easier.

This series improves with each book.   Maybe it is the way Stacy Claflin shares more about the characters and their histories and futures as the story goes on, maybe it is that I became more invested in the story as the series goes on.   I am not sure but this is now a must-read series for me.

If you are a paranormal fan this is the perfect series for you .  Start with book one Renegade Valkyrie and continue with Pursued Valkyrie then head straight into Silenced Valkyrie.

Purchase your copy at Amazon