REVIEW of Fragments of Ash by Katy Regnery

A twisted, retelling of Cinderella is exactly up my alley.   I am a sucker for fairytale retells of any type but especially when they are twisted.   Evil-stepmother is now an evil-stepfather.     Evil stepsisters are now evil stepbrothers.    Fairy godmother is now fairy godfather.    You get the idea.       It is awesome, wonderful, and perfect.

Ashley was dealt a raw deal on life yet she doesn’t have that oh poor me attitude, she accepts things for what they are, knows that she doesn’t want to settle for the life she is given, and is not willing to bend to the stepfather’s rules.   I liked that she did what she had to just to survive but she also did what was needed to become a better person than her mother and achieve the goals that she wanted.   I liked that she took a risk in life and knew that it was the only way that she could escape the life her mom left her in.

Julian and Ashley together were a slow, hot, and beautiful friendship.   They were thrown together by the fairy godfather and were not happy about it but it was in Ashley’s best interested for her to be with Julian.    Instantly there was an attraction, a heat, but neither of them acted on it.   Julian because he had been burned by a past relationship, Ashley because she was new to relationships.  It was wonderful to watch they come together as friends, confidents, and eventually something more.

Katy Regnery is an author that I am excited to read more of.  I am a fan of fairytales and she has proven to be a talented writer of them.


My name is Ashley Ellis…
I was thirteen years old when my mother – retired supermodel, Tig – married Mosier Răumann, who was twice her age and the head of the Răumann crime family.
When I turned eighteen, my mother mysteriously died. Only then did I discover the dark plans my stepfather had in store for me all along; the debauched “work” he expected me to do.
With the help of my godfather, Gus, I have escaped from Mosier’s clutches, but his twin sons and henchmen have been tasked with hunting me down. And they will stop at nothing to return my virgin body to their father
…dead or alive.
** Contemporary Romance. Due to profanity and very strong sexual content, this book is not intended for readers under the age of 18.**
♥ ♥ ♥ ♥ ♥
Fragments of Ash is part of the ~a modern fairytale~ collection: contemporary, standalone romances inspired by beloved fairy tales.

~ "This novel is a stunning achievement; so deep, intense and moving. I was blown away by it, and the characters resonated for a long time after I finished!" -- Tessa Shapcott, former Mills & Boon editor on "Never Let You Go" (AMF #2)
~"I loved this book with all of my heart. As always, I was captivated by the writing. I was immediately drawn in by the angst. And I connected with each character as though they were my best friends." --L.B. Simmons, USA Today bestselling author on "Ginger's Heart" (AMF #3)
"I absolutely loved this book! It was sweet, sexy, heart-warming, and incredibly romantic!! I read it in one non-stop sitting because I just didn't want to put it down. It's a contemporary fairy tale with a moody, brooding, deeply protective modern-day bad-boy knight who falls utterly in love with a down-on-her-luck damsel in distress who he rescues. This was exactly the kind of addictive book I was looking for and I highly recommend it as a new favorite!!" --Aestas Book Blog on "Dark Sexy Knight" (AMF #4)
~"Your book is beautiful, Katy. It's the perfect balance of sweet and sexy. I love the writing. I love the characters. You have me sighing like a damn teenager." --Leylah Attar, New York Times bestselling author on "Don't Speak" (AMF #5)
~"I am a huge - HUGE - fan of Katy Regnery's modern fairytales. A couple of them go down as some of my favorite books of all time. So I was beyond excited to get an early copy of Shear Heaven, a re-telling of the Rapunzel fairytale and, you guys? This might be the most fairytale-iest of all the fairytales." --Bookgasms Book Blog on "Shear Heaven" (AMF #6) 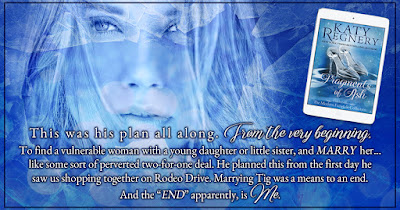 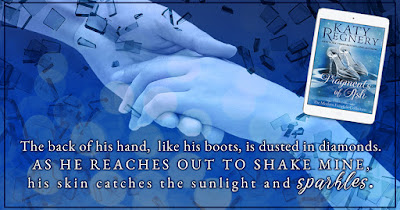 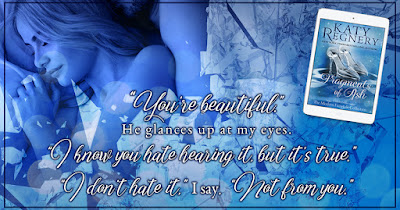 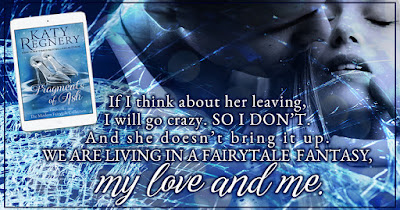 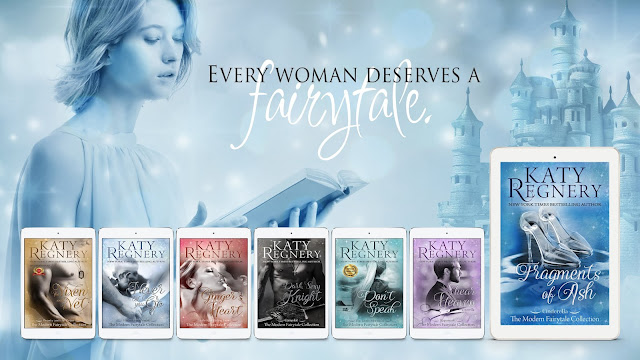