BLOG BLITZ of The Adventures of Isabelle Necessary by Martii Maclean

The Adventures of Isabelle Necessary 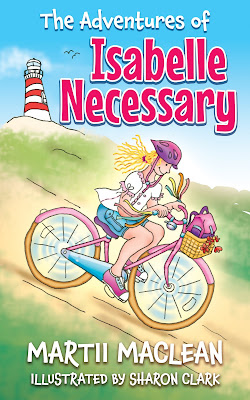 One gutsy eleven-year-old, a cool beach town, a hilarious crew of friends and oodles of adventures.

Once upon a beach, there was a girl called Isabelle Necessary. A girl with an unusual name and a rather extraordinary life. She roams around a sleepy beach town with her loyal team of friends.  Follow Isabelle, Tammy, David, Nin, Draino the cat and Champ the wonder dog as they navigate one sticky situation after another and figure out how to turn a frog into a movie star, deal with a never-ending milkshake and escape being trapped in a lighthouse.

The type of book that brings back childhood memories and captures the essence of being a free-spirited kid.

Perfect for teachers and educators as the book comes with a teacher’s resource guide and student maker kit by Isabelle Necessary herself. Middle-grade reading level. 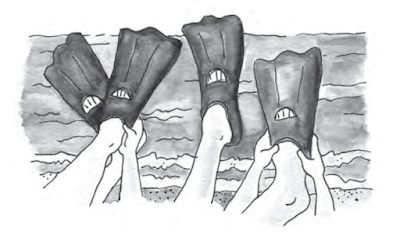 Their neighbours usually gave Isabelle a silver coin for being so helpful, and she’d been saving those coins all winter. Last week she had bought a snorkel, mask and flippers at Halfway Percy’s shop.
It was too dangerous for Isabelle and Tammy to go snorkelling on their own, so the second part of their plan had been to do a deal with David, who would go with them and be their guide.
David had learned from the elders in his family, so he knew a lot about watching the weather, and the tides and currents in the cove. Importantly, he knew the places to find the most interesting fish, and he told the girls he would work for muffins.
It was going to be high tide in an hour. Isabelle packed her gear and the picnic food, plus David’s muffins, into the basket on her bike.
‘Bye, Aunt Emma, thanks for the lunch and the muffins.’
‘You stay close to David, his uncle Mick says he’s a good, safe guide.’ Aunt Emma smiled as she kissed Isabelle’s check, but she still looked worried.
‘I’ll be safe, promise,’ said Isabelle, as she pedalled away.
Tammy and David were waiting at the corner of Banks Road when Isabelle got there.
‘Did you bring the muffins?’ David asked, checking that the deal the girls had made was still on. ‘Sure did,’ Isabelle said. ‘Two muffins per hour for being our guide.’ She patted the bundle in her basket.
Excited, Isabelle and Tammy followed behind David as he rode along the path past the caravan park. Some tourists were standing there, holding onto tent poles and scratching their heads. They turned up Lighthouse Road and then swerved onto the track that ran down to Mermaid Cove.
The cove was the first place everyone swam in springtime. It was always protected from the squally, southerly winds. The town of Saggy Beach blocked the blustering westerlies, Lighthouse Point blocked winds from the east, and the cove only got windy when a summer storm blew winds from the north. Today the water would be warm and calm.
‘There’ll be loads of fish sheltered in the cove today,’ said David.
‘Perfect,’ said Isabelle.
The girls set up a beach camp, spreading their towels out on the sand and hiding their picnic lunch from the hungry seagulls.
The calm blue water was dotted with sparkling diamonds of morning light. Swells rose up and down gently. Small wavelets lapped against the gritty sand with a soft heartbeat rhythm. Isabelle loved that sound, especially at night when the waves whispered through her bedroom window.
They had timed it just right: the tide was about to turn. Soon the sea would stop flowing into the cove and stop for half an hour or so, as though the ocean was having a nap. During that time, fish would swim out of their hiding places in the weeds and rocks, and go about their business of finding food.
Isabelle and Tammy were excited. Mermaid Cove splashed with fishy activity, and they would be like floating explorers, travelling in the mysterious world hidden under the surface of the sparkling water.
Isabelle grabbed her snorkelling gear and pulled the mask onto her head. ‘Mask and snorkel,’ she said.
‘Check,’ said Tammy, doing the same. ‘Flippers.’ Isabelle pulled them on.
‘Check.’ Tammy did the same. Then she tripped over and fell onto the warm sand. ‘How do people walk in these things?’
Moments later Isabelle fell down, too.
They both watched as David walked into the water before putting on his flippers.
‘Oh, so that’s how,’ Tammy said.
They both pulled off their flippers and walked to the water’s edge.
Isabelle sat in the shallow water and wiggled her feet into her flippers, instantly feeling her feet become magically buoyant and lively in the gently lapping waves. She fixed her mask onto her face and tightened the straps, just like David had taught them. She placed the snorkel in her mouth and bit down on the chewy plastic mouthpiece.
The two girls looked at each other and burst out laughing, giggling and making kazoo noises through their snorkels.
‘Ooh ook o unny,’ said Isabelle and then spat out her snorkel. ‘You look so funny.’
‘So do you. Hey, how will we talk underwater?’
They made up some signals to use when they were in the water and couldn’t talk. They were ready to float off on their adventure.
‘Stay close and follow me,’ said David. ‘I’ll take you to the rock ledge. Don’t worry, it’s not too deep.’ He flicked his flippers and floated away.
Tammy went next.
Isabelle checked her mask and snorkel then glided into the glittering blue. Her breathing was loud in her ears. She thought she sounded like Darth Vader, especially when her breaths starting coming faster and faster. I can’t do it, she thought.
She heard a strange noise come out of her snorkel, like a little yell. She quickly pulled her head out of the water and spat the snorkel out of her mouth, gasping for air and feeling scared and dumb and disappointed. After a minute, her breathing calmed down and she tried again. This time she put just her face in the water and started puffing again.
Feeling scared is not part of the plan, she thought, feeling determined. Then she tried counting: in, two, three; out, two, three. It was like Aunt Emma’s meditation classes at the retirement village. Soon she was relaxed and good to go.
Tammy and David were just up ahead. Isabelle paddled towards the rocks. Floating over the ripples of sand at the bottom of the cove, she felt like she was flying over a great desert, looking down on the rows of tiny dunes that were caused by the current.

Up ahead she could see a shell with a collection of legs sticking out of it. It was a hermit crab, trundling along in her direction. She had decided to follow it when suddenly some silver fish sped past, glimmering in the light. Isabelle jumped with surprise, then giggled. The giggles bounced around inside her head, sounding like a drum. Everyone’s on the way to the rocks for lunch, she thought.
Another school of fish that Isabelle thought might be sardines zigzagged around her as if they were one big fish. They moved in perfect formation, the way birds do when they’re heading for their nests at sunset. The school of sardines swam ahead of her towards a forest of seaweed that waved and danced in the gentle, ebbing current. Then the fish swirled like a cloud of silver leaves on the wind and swam away in a hundred different directions. 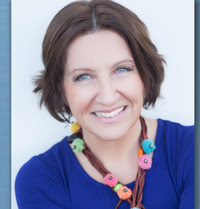 Author Bio – Martii Maclean lives in a tin shack by the sea, catching sea-gulls which she uses to make delicious pies, and writing weird stories. She likes going for long bicycle rides with her cat, who always wears aviator goggles to stop her whiskers blowing up into her eyes as they speed down to the beach to search for mermaid eggs. Or how about this…

Martii Maclean writes fantastical, adventurous tales for children and teens and sometimes adults. She was born in Sydney, Australia and now lives in Brisbane with her husband Trevor and her cat Minerva. Her work as an educator and librarian, allows her to share her love of stories and of story-telling with many young people. This inspires Martii to create thought-filled stories that explore the wonderful world of ‘what if’. Find out more about Martii and her stories at www.martiimaclean.com