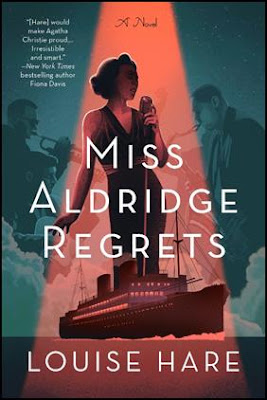 Named A Most Anticipated Mystery of Summer by Betches, Essence, Crime Reads and more!

The glittering RMS Queen Mary. A nightclub singer on the run. An aristocratic family with secrets worth killing for.

London, 1936. Lena Aldridge wonders if life has passed her by. The dazzling theatre career she hoped for hasn't worked out. Instead, she's stuck singing in a sticky-floored basement club in Soho, and her married lover has just left her. But Lena has always had a complicated life, one shrouded in mystery as a mixed-race girl passing for white in a city unforgiving of her true racial heritage.

She's feeling utterly hopeless until a stranger offers her the chance of a lifetime: a starring role on Broadway and a first-class ticket on the Queen Mary bound for New York. After a murder at the club, the timing couldn't be better, and Lena jumps at the chance to escape England. But death follows her onboard when an obscenely wealthy family draws her into their fold just as one among them is killed in a chillingly familiar way. As Lena navigates the Abernathy's increasingly bizarre family dynamic, she realizes that her greatest performance won't be for an audience, but for her life.

My Thoughts:  Lena escapes a London, a town that is pulling her down, to go to New York after a once in a lifetime opportunity is offered to her.   Get on the Queen Mary, head to New York, and star on Broadway.  The trip to New York introduces her to a very influential family where things are not quite what they seem.

I knew from the beginning of the trip to New York that there would be more to the story then just calm sailing.  I did not know what was going to happen, but I was excited to see where I was heading.  There was murder, family drama, and family secrets.  I had no idea who the killer was, what the reasoning was but I knew that I would enjoy figuring it all out.

There were times that I felt like the storyline slowed down, got away from the main storyline too much, and at those times I would skim the page or put the book down to come back to in a few hours.   Overall, I enjoyed the book and the characters but I did not feel any great connection to either of them.