Last Dance on the Starlight Pier by Sarah Bird 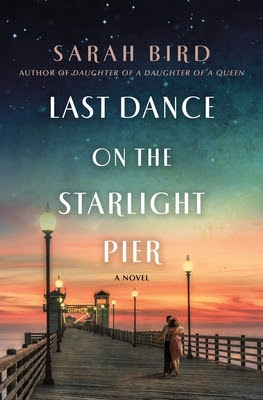 Taken from Goodreads: Set during the Great Depression, Sarah Bird's Last Dance on the Starlight Pier is a novel about one woman—and a nation—struggling to be reborn from the ashes.

July 3. 1932. Shivering and in shock, Evie Grace Devlin watches the Starlite Palace burn into the sea and wonders how she became a person who would cause a man to kill himself. She’d come to Galveston to escape a dark past in vaudeville and become a good person, a nurse. When that dream is cruelly thwarted, Evie is swept into the alien world of dance marathons. All that she has been denied—a family, a purpose, even love—waits for her there in the place she dreads most: the spotlight.

Last Dance on the Starlight Pier is a sweeping novel that brings to spectacular life the enthralling worlds of both dance marathons and the family-run empire of vice that was Galveston in the Thirties. Unforgettable characters tell a story that is still deeply resonant today as America learns what Evie learns, that there truly isn’t anything this country can’t do when we do it together. That indomitable spirit powers a story that is a testament to the deep well of resilience in us all that allows us to not only survive the hardest of hard times, but to find joy, friends, and even family, in them.

My Thoughts:  The Great Depression is happening.  People are struggling just to stay fed, clothed, and in their homes yet there are dance parties happening that last days, weeks, and months.   People are paying to come watch these dancers.  I had never heard of such a thing and I found myself intrigued at the idea of it.   I love when I pick up a book from an era that I thought I was familiar with and learn so many new things about that time.   That is exactly what happened when I picked up Last Dance at the Starlight Pier.

The characters were unique.   They were all just trying to keep their heads above water.   They were doing what they had to do to make money.  The dance marathon is such a unique way to do that.  I loved seeing how Pop would manipulate the dancers to add drama to the marathons just to keep the people coming and paying.  I do think that at times there were a lot of characters, some made brief appearances, some were main characters through the entire story, and some I am not sure had anything to really do with the story.

I enjoy the story, I like the characters, and I was intrigued by where it was all heading.   I would have loved more history and a little less drama but I would still recommend Last Dance at the Starlight Pier to anyone who likes historical fiction books.

Meet Sara Bird (Taken from her website):  Sarah Bird is the author of 11 novels. Her latest, Last Dance on the Starlight Pier, will be published by St. Martin’s Press in April 2022. Set during the Great Depression, the novel focuses on one woman—and a nation—struggling to be reborn from the ashes.​

Sarah was born in 1949 in Ann Arbor, Michigan. Her father was an officer in the U.S. Air Force. Sarah and her family—a Catholic family of eight, including her mother, Colista Bird—travelled with him around the the world during her childhood. She earned a BA degree from the University of New Mexico and an MA degree in journalism from the University of Texas at Austin. Sarah and her husband, George Jones, live in Austin, Texas, with their son and, arguably, the cutest corgi in the world.

During the mid-1980s, Bird was a founding contributing editor to Austin’s Third Coast magazine, for which she wrote numerous feature articles. Her first published novel was a mystery, Do Evil Cheerfully, published as Sarah McCabe Bird. In 1986, her comic novel Alamo House, based on her experience as a graduate student at the University of Texas, was published.

In addition to her novels, Sarah has written screenplays for television and magazine articles for national women’s magazines. Bird adapted her novel The Boyfriend School into a screenplay for the 1990 movie Don’t Tell Her It’s Me, starring Shelley Long and Steve Guttenberg. She has also written screenplays for the National Geographic Channel and Hallmark, as well as the CBS movie Yesterday’s Children.

Brothers, National Geographic, ABC and TNT, as well as several independent producers. In 2015, she was selected for the Meryl Streep/Oprah Winfrey Screenwriters’ Lab.