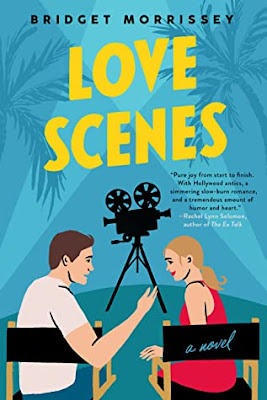 From Goodreads…Acting like she's in love with her handsome nightmare of a co-star--in a movie directed and produced by her complicated Hollywood royalty family--is Sloane's job. But what happens when the lines between script and reality get blurred?

Out-of-work actress Sloane Ford is in desperate need of something to do after losing her steady TV gig. When her famous family ropes her into working as a producer on their World War II-era romance, they neglect to mention that the film will be headlined by Joseph Donovan, her least favorite former co-star of all time. The roguish actor made her life a living hell the last time they worked together, using his movie star good looks and Irish charm to cover for his erratic professional behavior. On their new film set, he promises he's different now, but Sloane is far from convinced.

As filming gets underway, it becomes clear that anything that can go wrong will go wrong. When the lead actress is abruptly fired, Sloane agrees to step in and take over the role, and she starts to remember why she fell in love with acting in the first place. On camera, she and Joseph share an electric chemistry. Off camera, they've been honing their characters and, much to Sloane's surprise, growing closer. But playing the role of a woman in love with Joseph Donovan is a dangerous business, and the more time they spend together, the less Sloane can tell what's real between them, and what's just for show.

My Thoughts…Working with your family is never easy, much less a Hollywood family working on a movie.   Sloane’s acting career was cut short and while her mother gave her a job on the movie the family is working on, she feels like it is a pity job.    When things happen on set and she is suddenly given the lead role starring against the actor who made her life hell before we know that things will get interesting.

Love Scenes is a fun and easy book to read.   The family dynamics are spot on with many tense moments along with a lot of laughs.   I liked how there was ex’s, current spouses, girlfriends, sisters, mothers, and fathers all involved in the making of the film.  It kept things interesting and fun to read letting me see the interactions of all the members of this Hollywood family.  The fact that everyone, including the ex’s, seemed to get along for the most part was a relief.   I liked that the family, for the most part, got along.

Joseph was a wild card for me.  I could like him or I could hate him.   He had to earn his keep with me.   I liked that Sloane put her hurt aside and did what was best for the movie but she also did not quickly forgive him.   He put in the work, did the job, and earned the trust back.  I liked that it was a slow romance.   The heat and attraction was there from the beginning but it took time for their relationship to develop and I enjoy seeing them get to know each other again.

Meet Bridget Morrisey…Bridget Morrissey lives in Los Angeles, California, but hails from Oak Forest, Illinois. When she’s not writing, she can be found coaching gymnastics or headlining concerts in her living room.

Her adult debut, LOVE SCENES, releases in the summer of 2021. Her first two YA novels, WHAT YOU LEFT ME and WHEN THE LIGHT WENT OUT are both out now.

She is represented by Taylor Haggerty of Root Literary.