Review for The Librarian of Saint-Malo by Mario Escobar

The Librarian of Saint-Malo by  Mario Escobar 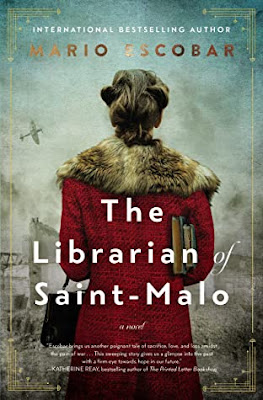 From Goodreads…Through letters with a famous author, one French librarian tells her love story and describes the brutal Nazi occupation of her small coastal village.

Saint-Malo, France: August 1938. Jocelyn and Antoine are childhood sweethearts, but just after they marry and are hoping for a child, Antoine is called up to fight against Germany. As the war rages, Jocelyn focuses on comforting and encouraging the local population by recommending books from her beloved library in Saint-Malo. She herself finds hope in her letters to a famous author.

After the French capitulation, the Nazis occupy the town and turn it into a fortress to control the north of French Brittany. Residents try passive resistance, but the German commander ruthlessly purges part of the city's libraries to destroy any potentially subversive writings. At great risk to herself, Jocelyn manages to hide some of the books while waiting to receive news from Antoine, who has been taken to a German prison camp.

What unfolds in her letters is Jocelyn’s description of her mission: to protect the people of Saint-Malo and the books they hold so dear. With prose both sweeping and romantic, Mario Escobar brings to life the occupied city and re-creates the history of those who sacrificed all to care for the people they loved.

My Thoughts…As an avid reader I love libraries.   I had not given much thought to the libraries during WWII and how that war would affect them.   The idea that the Nazi’s would burn books just to push their propaganda is horrible.  I cannot imagine the number of amazing books lost during the war.  Jocelyn’s strength in protecting her library while also working with the resistance to do her part in fighting the Nazi’s was amazing.   She was a hero, understated, but appreciated by the people of Saint-Malo.

WWII was a horrible time in France.   Jocelyn worked to save the library but in the process she also writes letter to Mario Escobar in hopes that her story would not die with her.   She knew that the risks she took could cause her death at any time.   There was always the risk of being caught and prosecuted for going against the Germans.  I enjoyed each letter she wrote and the depth that it gave her story.   She wrote of the happenings but also of her feelings and fears.   I felt for all that she had to live through but was in constant awe of the strength she showed in standing up to those against her, working with those who needed her, and never giving up hope that her library would still be standing when the war was over.

There are many books written about WWII and even more historical fiction but this book was unique in its letter format and the focus on the library.   I loved it, I could not stop reading, and I recommend it.

Meet Mario Escobar…Mario Escobar Golderos (Madrid, Spain) has a degree in History, with an advanced studies diploma in Modern History. He has written numerous books and articles about the Inquisition, the Protestant Reformation, and religious sects. He is the directs the magazine Nueva historia para el debate, in addition to being a contributing columnist in various publications. Passionate about history and its mysteries, Escobar has delved into the depths of church history, the different sectarian groups that have struggled therein, and the discovery and colonization of the Americas. He specializes in the lives of unorthodox Spaniards and Americans. Books.