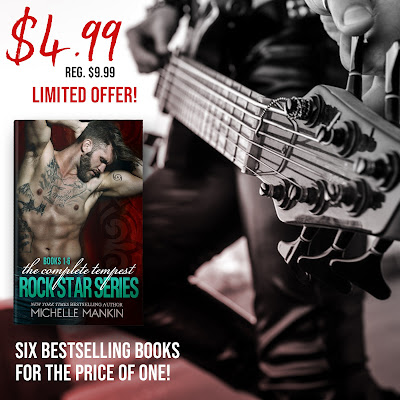 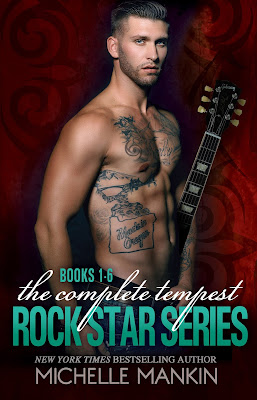 Six bestselling full length novels.
Your all access backstage pass to the world's most dysfunctional rock band.
Tempest rocking.
Tempest rolling.
Tempest raging out of control.
The complete series includes all six books boxed together digitally for the first time ever. Over 1200 pages. It also includes a bonus excerpt of The Right Man.
IRRESISTIBLE REFRAIN
Two years ago everything changed for the remaining members of the Seattle rock band Tempest.
Two years is a long time.
Too long to keep on remembering.
Not nearly long enough to forget.
In trouble with nowhere else to go songstress Lace Lowell seeks refuge with the band during their stop in New York City. It's a risky move for her because they are both there, two impossibly good looking men whose lives are inseparably entwined with hers. One who bruised her heart and one who smashed it into pieces.
ENTICING INTERLUDE
To the talented vocalist Justin Jones, love is merely a game that he plays by his own rules.
But to Bridget Dubois, love and heartache are one and the same.
Broken too many times before, the delicate beauty keeps her emotions carefully concealed. Bridget has her own set of rigid rules when it comes to men. She prefers to avoid them altogether, especially dangerously seductive auburn haired emerald eyed players like Justin.
CAPTIVATING BRIDGE
Warren "War" Jinkins is that guy.
The bad one.
Tempest's ex front man, an arrogant rock god.
The only thing larger than his ego is his capacity for self-destruction.
His bad attitude has cost him. His woman. His best friend. His band. Everything.
Shaina Bentley is that girl.
The good one.
Hollywood's pink candy-coated sweetheart.
The star of Pinky Swear, television's top rated teen show.
He's a one man island. She's a fragile captive soul.
Is love a current too dangerous to cross or will it be the bridge that brings them together?
RELENTLESS RHYTHM
The one she really wants is out of reach.
The one he really needs is already taken.
Dizzy Lowell, rhythm man for the rising rock band Tempest is a wizard on the guitar and a wonder with women. But the hookup specialist hides his emotional scars beneath his suave exterior. He never lets anyone truly touch him until he meets April Reynolds, the confident bartender of the Diamond Mine.
TEMPTING TEMPO
Sager Reed the strong and silent bassist for the rock band Tempest is well acquainted with loss. The thoughtful tattoos he designs only hint at his turbulent youth. He buries his guilt about it deeply within his troubled heart.
Melinda T. Belle is the daughter of a dysfunctional rock legend. Avoiding emotional entanglement, she has turned her back on nearly everyone and everything she has ever known. Alone, she tries desperately to find fulfillment in the one dream she has left, competitive skiing.
Can Sager overcome his dark past?
Will Melinda realize her worth?
Will they both see that love is only thing that really matters?
SCANDALOUS BEAT
A rock star. A stripper. Can a hookup lead to a happily ever after?
BONUS CONTENT:
THE RIGHT MAN
A pretty woman and a handsome rock star
A modern retelling of Cinderella.
Can a hookup for cash lead to a happily ever after?
Text ROCK BOOK to 345345 for cover reveal and release alerts. On January 31, 2019 one subscriber will be randomly chosen to receive an autographed paperback set of the entire Tempest series. (US only) 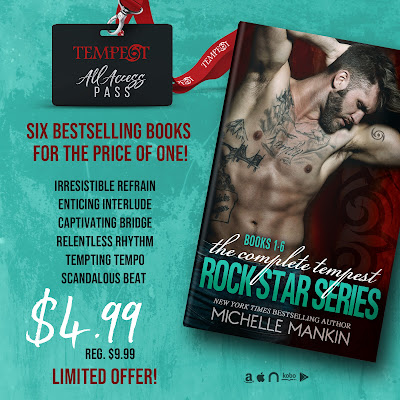