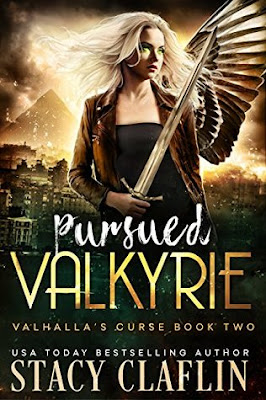 She can run, but she can’t hide.

Predator and prey. Soleil is a Valkyrie—the quintessential huntress—and she’s on a mission. Unfortunately, she’s also broken the rules. Now agents of Valhalla hunt her. And they’ll destroy anything that gets in their way. Even her loved ones.

To keep her family and friends safe, Soleil distances herself from them—at great personal cost. Her only chance at a happy ending is to complete her assignment before she’s found. But she can’t do it alone. So she enlists the help of the one person whose survival doesn’t matter to her—a person who also wants her dead.

The unlikely duo flees to Egypt and begins their pursuit. It’s not long before a rogue faction and the agents of Valhalla find them. Compounding her problems? Her trickster boyfriend, Titan, is also searching for her. He’s closing in, putting himself in great danger. And she’ll do anything to keep him safe.

Pursued Valkyrie is the second book in Stacy Claflin’s Valhalla’s Curse Series.     These books absolutely have to be read in order.     This book picks up exactly where the first book ends.     Soleil is still looking for the dictator and she is close to finding him, the Valhalla is still searching for her, she still loves Tritan, and she still has amazing friends willing to do whatever needed to keep her safe.

I love that while this is a series, the books are short, full of action, and are being released close together.   The action makes the story move quickly while not losing any of the connections between the reader and the characters.   I am entirely invested in the characters, the plot, and the outcome of Soleil’s missions.     I managed to read each book in a single sitting and look anxiously forward to continuing the series when I finish.

**Thank you Stacy Claflin for gifting me a copy of your book in exchange for an honest review.