REVIEW of The Broken Girls by Simone St. James 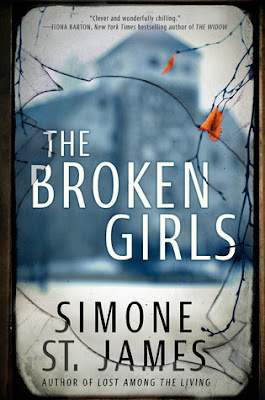 The "clever and wonderfully chilling" (Fiona Barton) suspense novel from the award-winning author of The Haunting of Maddy Clare...

Vermont, 1950. There's a place for the girls whom no one wants--the troublemakers, the illegitimate, the too smart for their own good. It's called Idlewild Hall. And in the small town where it's located, there are rumors that the boarding school is haunted. Four roommates bond over their whispered fears, their budding friendship blossoming--until one of them mysteriously disappears. . . .

Vermont, 2014. As much as she's tried, journalist Fiona Sheridan cannot stop revisiting the events surrounding her older sister's death. Twenty years ago, her body was found lying in the overgrown fields near the ruins of Idlewild Hall. And though her sister's boyfriend was tried and convicted of murder, Fiona can't shake the suspicion that something was never right about the case.

When Fiona discovers that Idlewild Hall is being restored by an anonymous benefactor, she decides to write a story about it. But a shocking discovery during the renovations will link the loss of her sister to secrets that were meant to stay hidden in the past--and a voice that won't be silenced. . . .

From the very first chapter I was hooked.     Sometimes when a book bounces between era’s it gets hard to follow.   With the Broken Girls it was so easy to tell who was telling the story, where they were, and what was happening.  The past to present alternating chapters were perfect.

Broken Girls has a ghost story aspect with a mystery to solve.    Who is Mary Hand?   I was thrilled with each hint, each clue, and each step that Fiona took towards solving the mystery of what happen at Idlewood Hall.    There were many twists and turns that I didn’t see coming yet thrilled me to learn about.    I knew that Fiona would find the truth but I had no clue how she would manage to do it.

This book is amazing.    It will definitely make my favorites of 2018 list.    If you are a Gothic mystery fan this is the book for you.
Add to your MUST-READ list on Goodreads
Purchase your own copy at Amazon or Barnes and Noble

Advance praise for THE BROKEN GIRLS