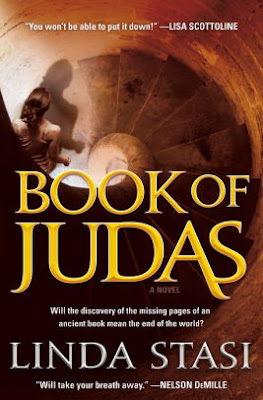 When her infant son is placed in mortal danger, New York City reporter Alessandra Russo is forced to save him by tracking down the missing pages of the Gospel of Judas, a heretical manuscript that was unearthed in Al-Minya, Egypt in the 1970's. The manuscript declares that Judas was not the betrayer, but the beloved, of Jesus. The Gospel disappeared, only to turn up decades later, rotted beyond repair in a Long Island bank deposit box. Rumors ran rampant that the most important pages had been stolen.

Do the lost pages reveal a secret that will challenge Christianity's very belief about the creation of life, or even the power to unleash Armageddon? What if such explosive documents fell into the hands of modern-day terrorists, dictators, or religious fanatics?

During her investigation, Alessandra is plunged into a dark world of murder, conspiracy, sexual depravity, and most importantly, a race against the clock to save her own child.

Linda Stasi did a great job of bringing the reader into the story and making her words come alive.    I felt that the story flowed easily.

The Gospel of Judas is a religious mystery that I know nothing about.    The not knowing for me threw me back a couple times but it was easy to understand the importance of this item.    The feel of getting a history lesson without it being boring non-fiction writing was great.  I ended the book wanting to know more and hoping to be able to find more information on something I knew nothing about until I picked up this book.

The mystery part of the story was my favorite.   The romance and Alessandra’s personal life was not so fun to me.   Alessandra as a mother left something to be desired, who would leave their child without someone they didn’t entirely trust.    I just couldn’t connect with Alessandra.