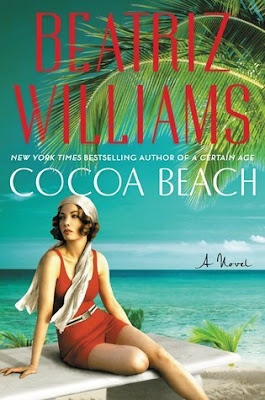 The New York Times bestselling author of A Certain Age transports readers to sunny Florida in this lush and enthralling historical novel—an enchanting blend of love, suspense, betrayal, and redemption set among the rumrunners and scoundrels of Prohibition-era Cocoa Beach.

Burdened by a dark family secret, Virginia Fortescue flees her oppressive home in New York City for the battlefields of World War I France. While an ambulance driver for the Red Cross, she meets a charismatic British army surgeon whose persistent charm opens her heart to the possibility of love. As the war rages, Virginia falls into a passionate affair with the dashing Captain Simon Fitzwilliam, only to discover that his past has its own dark secrets—secrets that will damage their eventual marriage and propel her back across the Atlantic to the sister and father she left behind.

Five years later, in the early days of Prohibition, the newly widowed Virginia Fitzwilliam arrives in the tropical boomtown of Cocoa Beach, Florida, to settle her husband’s estate. Despite the evidence, Virginia does not believe Simon perished in the fire that destroyed the seaside home he built for her and their young daughter. Separated from her husband since the early days of their marriage, the headstrong Virginia plans to uncover the truth, for the sake of the daughter Simon never met.

Simon’s brother and sister welcome her with open arms and introduce her to a dazzling new world of citrus groves, white beaches, bootleggers, and Prohibition agents. But Virginia senses a predatory presence lurking beneath the irresistible, hedonistic surface of this coastal oasis. The more she learns about Simon and his mysterious business interests, the more she fears that the dangers that surrounded Simon now threaten her and their daughter’s life as well.

In true Beatriz William’s style this book had everything that I look for in a good book.    There was a historical event with WWI, romance, family, and a strong female character.     Virginia is the main female character.   She was strong in keeping herself safe while she was driving an ambulance during WWI yet feminine enough to trust a man (Simon) to take care of her.      Simon was a different type of character.   I felt like he was shady.    From the first meeting he seemed suave, too smooth, and up to something.    As I learned more about him, when I could decipher truth from the lies, I just never learned if I could trust him.   While I didn’t trust him, as a character I liked him.  He had charisma,  he had a plan, and he did love Virginia.

The book went back and forth between 1920’s in Florida  and 1917’s and WWI.    The era’s were portrayed wonderfully.    The wartime story wasn’t graphic but it was easy to picture the roads, the rain, the pop-up hospitals, and the soldiers of the time.     I was able to understand what Virginia and Simon were living through during this time.   The 1920’s story was not quite as interesting to me.    There was a lot going on with the plantation, the shipping company, Aunt Clara, Simon, and Samuel.   I wasn’t sure who was the good guy and who was the bad guy.

Beatriz William is a go-to author for me.    I  would recommend picking up your own copy of Cocoa Beach and falling back in time.

Thank you Tavia Kowalchuk at William Morrow for a copy of the book in exchange for an honest review.