No Return by Stacy Claflin 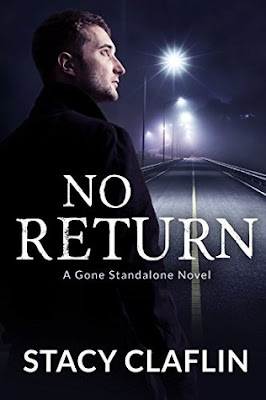 Family comes first. Until it kills you…

Rusty Caldwell is a lonely victim of tragedy. After losing his wife and kids to a drunk driver, he spends most nights towing drunks to keep them off the streets. His one-track existence takes a turn when he finds out his estranged sister Mandy has committed suicide.

After flying out to offer his support, Rusty learns there’s much more to the story. It turns out his sister had been cheating on her husband Chris with Travis Calloway, the rich CEO of the biggest company in town. Before Mandy died, she claimed that Travis fathered one of her children and demanded that he pay up…

Rusty and Mandy’s neighbor Laura look into Travis, only to receive death threats for their troubles. With Travis and Chris both looking guilty, Rusty better find out the truth before he’s the next one to fall.

No Return is a compelling suspense dealing with themes of loss and forgiveness. If you like gripping page-turners, twisted villains, and surprising twists and turns, then you’ll love Stacy Claflin’s latest chilling creation.

The Gone Series is the first series that I had read by Stacy Claflin.  Rusty is a secondary character in the series, saving Macy’s mom from driving drunk.     He is a character that was wonderful in the few small scenes he had in the book.  I was thrilled when Stacy Claflin let us know that he would be getting his own story.    I wasn’t sure how it would play out but I knew he had more of a story to tell.

No Return is the perfect accompaniment to the Gone Series.     It is a suspense with a lot of heart.  He brings to light a different angle on life.   Rusty has an incredibly tough time of late and it doesn’t seem to be getting better when he finds out his estrange sister is dead.    Being the outstanding guy he is, he rushes across the country to support her family.    With all of this happening he manages to open his eyes and realize all that he has pushed aside to keep himself from being happy.    Rusty realizes that he must deal with his past to get to his future.

I love that Stacy Claflin was willing to tell the stories of the secondary characters.     This is the perfect story and only made me like Rusty more.    I recommend checking out the entire series.

Past reviews of books in this series by Stacy Claflin