I received my review copy from NetGalley with access granted from Random House Publishing for a honest review. 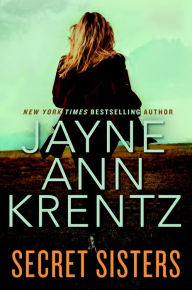 Madeline and Daphne were once as close as sisters—until a secret tore them apart. Now it might take them to their graves.

They knew his name, the man who tried to brutally attack twelve-year-old Madeline in her grandmother's hotel. They thought they knew his fate. He wouldn't be bothering them anymore...ever. Still their lives would never be the same.

Madeline has returned to Washington after her grandmother's mysterious death. And at the old, abandoned hotel—a place she never wanted to see again—a dying man’s last words convey a warning: the secrets she and Daphne believed buried forever have been discovered.

Now, after almost two decades, Madeline and Daphne will be reunited in friendship and in fear. Unable to trust the local police, Madeline summons Jack Rayner, the hotel chain’s new security expert. Despite the secrets and mysteries that surround him, Jack is the only one she trusts...and wants.

Jack is no good at relationships but he does possess a specific skill set that includes a profoundly intimate understanding of warped and dangerous minds. With the assistance of Jack's brother, Abe, a high-tech magician, the four of them will form an uneasy alliance against a killer who will stop at nothing to hide the truth....

My first Jayne Ann Krentz book and I wonder what rock I have been living under to have not read more from her.     Secret Sisters is the perfect blend of mystery, murder, suspense, and romance.   There was never a point where any of these over shadowed the rest of the story.    This is a perfectly balanced book.

Secret Sisters pulled me in from the first page and didn’t let me go until the very last page.    The plot is captivating, the characters are realistic and relatable, and the pace was perfect.      There are strong male and female characters that were able to stand up for themselves but were even better together.     The twists and turns that kept me guessing.  Just as I thought I knew where the story was heading Jayne Ann Krentz would through a new twist in and through me off my thoughts.

The romance was real.  It was not a wham, bam I love you romance.   It was developed, worked for, and not easy for Madeline and Jack.   The attraction was there, the feelings were there, yet they were timid to start a relationship with their histories.    I loved that they didn’t just fall in love and live happily ever after.    They had to work to be honest with each other and trust each other.      They built a foundation and that lead to more.

Secret Sisters is a book that I definitely recommend checking out.  Whether this is your first Jayne Ann Krentz book or one of many you have read pick this one up.