I received my review copy from Meredith Schorr in exchange for a honest review. 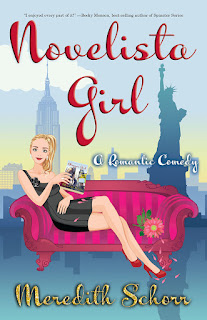 Readers first met sassy Kimberly Long in Blogger Girl, and now the feisty New Yorker is back in a sequel packed with quick wit, friendship, heartache, and, of course, romance.

Kim runs the most popular chick lit book blog on the web, loves playing house with her sexy lawyer boyfriend, Nicholas, and is finally pursuing her lifelong dream to become a published author. At first glance, her life is five-pink-champagne-flutes worthy.

But is there more to the story than meets the eye?

After hearing the phrase “chick lit is dead” more times than she’s read Bridget Jones's Diary, Kim is driven to desperate measures, seeking advice from up-and-coming chick lit author, Hannah Marshak, her high school nemesis and resident “mean girl.” As if Kim doesn't have enough on her plate balancing her secretarial duties with her blog Pastel Is the New Black, shrugging off the growing pile of agent rejections, and keeping her best friend from turning green over Kim’s budding friendship with Hannah, Nicholas is so blinded by his career ambitions, he doesn't see that their home sweet home could use more than a dash of sugar.

This is the year when all of Kim's dreams—professional and romantic—are supposed to come true, but will the story have a happily ever after, or will Kim end up unpublished and all alone?

As a follow up to Blogger Girl or as a stand-a-lone this is the perfect chic-lit book.   It is proof that chic-lit is not dead as Kim, the main character, had been told many times while trying to get representation for her book.     While the book is about Kim and her many let downs in getting representation for me it was more about the relationship between Kim and Nicholas.  I also enjoyed the relationships with Bridget and Jonathon.

I found myself remembering how quickly I devoured Blogger Girl (LOVED IT!) and how much I wanted to know more about the characters.     In Novelista Girl I got that chance.      I got to catch up with Kim and her friends, seeing what they were up to, how their respective jobs were progressing, and how their relationships were going.    I was sad to see that Kim was struggling in many aspects but proud of how strong she stayed.   Even when life was throwing *stuff* at her she managed to keep plowing through.   She is allowed to be sad or feel anger at how others were treating her, yet she did not let that send her on a detour from her dream of publishing.       Meredith Schorr definitely has written a strong and independent character.

I found myself laughing at their antics, smiling at the friendships, frowning when things did not go as I had hoped, and having tears when I feared that the characters were going to end up on the wrong path.     This is a MUST READ to anyone who is looking for a fun, easy, relatable, chic-lit story.

Check out my thoughts of Blogger Girl by Meredith Schorr (click here) on A Novel Review.
Posted by A Soccer Mom's Book Blog at 5:00 AM