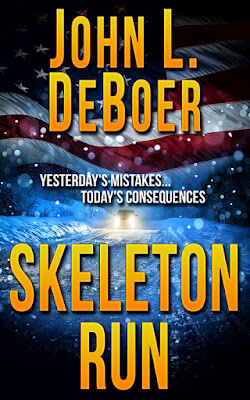 Twenty years ago, four teenage boys left a baby behind in a crushed car after they caused the tragic accident that took the mother’s life. Ever since, they've guarded the secret that would've ruined their lives and destroyed their future careers. But when one of them succumbs to illness, a blackmailer makes contact, and the survivors realize that, somehow, someone else knows. Now, everything that matters to them is at stake.

Las Vegas billionaire Wendell Logan is pursuing the role of political kingmaker, and he’s selected his unsuspecting king: Alan Granger, governor of Pennsylvania. Granger confesses his closet skeleton to Logan, but the tycoon has invested too much time and money into Granger’s future presidential campaign to let him and his old friends endanger Logan’s power play.

I love a good thriller.    That is exactly what Skeleton Run is.    The idea of four young men causing an accident that killed a woman and then leaving a baby still alive on the side of the road just to save themselves is sad.    I understand that there is the scare of being charged with a crime, but WOW!   It is just wrong.    Then these four men had to live with their guilt and secret for the rest of their life.   At least until others learned of what had happen.

Watching these men grow up, become successful and finding relationships, while living with the guilt was interesting.    As their lives go on, the secret haunts some of them while it seems not to bother others.   Some of the characters I felt sorry for, others I wanted to shake and tell them to wake up and take responsibility for what was happening around them.    Al was definitely my least favorite.   He is exactly what I expect a politician with high expectation of his life to be like.    The fact that this drama started and continued with him seemed to make total sense to me.     I loved that Dr. Duncan became a pediatrician, I felt like that was making amends to leaving the baby on the side of the road.    The others didn’t have as much of a story line, but seemed to feel the guilt and wanted to make things right.

Skeleton Run is not a mystery.    John DeBoer let the reader in on the secret from the very beginning and kept us in the loop.    I knew who everyone was and what their secrets were.   It was a different style of writing and I really enjoyed it.    I like being in the know.   I recommend Skeleton Run to my fellow thriller readers.

Author page on RAP:  http://redadeptpublishing.com/#!/DeBoer-John/c/12029071/offset=0&sort=normal
: a Rafflecopter giveaway
Posted by A Soccer Mom's Book Blog at 5:00 AM