Six Months to Get a Life By Ben Adams PROMO POST 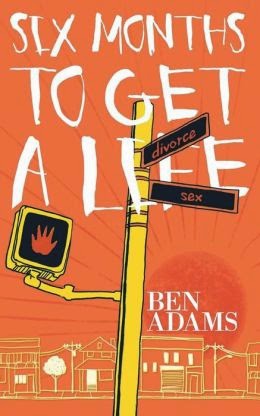 Newly divorced father Graham Hope is on the verge of a mid-life crisis and in fear of never having sex again. Faced with a desolate future he sets a deadline to turn his life around in this hilarious and heartwarming novel inspired by the author’s own break-up.

Finally liberated from the shackles of his unhappy marriage, Graham Hope is ready to embark upon a new life of carefree dating and unbridled fun. But before he knows it, his days are filled with endless TV soap operas and battling to engage with his two reluctant adolescent sons. Middle-age is looming and Graham has little to show for it; finding his happy ending is clearly going to be much tougher than he thought. Armed with a false confidence bolstered more by beer than true self belief, Graham sets himself a secret challenge to turn his life around by his 43rd birthday. But with B-Day only six months away, will Graham succeed in his quest for happiness and fulfillment? And more importantly, will he ever have sex again?

Six Month’s to Get a Life follows Graham Hope on his half-year adventure to discover life — and love — after divorce. Written in diary form, we follow Graham from the abject misery of his eccentric and meddling parents’ spare bedroom, to the relative highs of regaining his independence. Graham’s emotions ricochet, not unlike his young sons’, between anger and elation, desperation and determination, but with the support of his friends — well, those he was allowed to keep after the divorce — he manages to push himself into trying exciting new things. Graham’s zest for life leads to some priceless and often farcical moments; from twerking in night-clubs to taking fashion tips from his kids. But no sooner than Graham starts to find his feet, he learns that along with complacency may come imminent disaster.

Having survived his own separation and the accompanying administrative and emotional maelstrom, father-of-two Ben Adams turned to writing as a catharsis. He brings a refreshing realism and depth to the character of Graham Hope, a man galvanized into positive action in the face of personal adversity. No-nonsense, full of belly laughs and moments of real pathos, and underscored throughout by a delicious, acerbic wit, Six Month’s to Get a Life reveals Ben Adams as an exciting new male voice in commercial fiction.

About the author: Based in south-west London, Ben Adams has spent the past two decades working within local government service sector. In his spare time, Ben loves writing and spending time with his two sons and their dog, Albus. Six Months To Get a Life by Ben Adams (published by Clink Street Publishing RRP $10.99 paperback, RRP $3.82 ebook) is available online from 21st January 2015 from retailers including amazon.com and can be ordered from all good bookstores. For more information, please visit benadamsauthor.com or follow his exploits on Twitter @BenAdamsAuthor