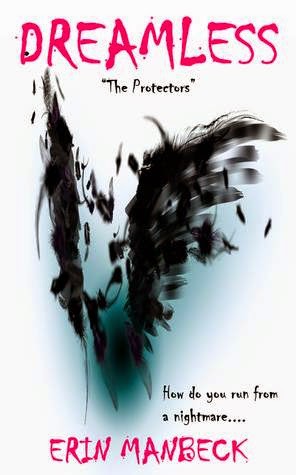 Eighteen year old Mira Daly had one goal, get out of Redding,WY and never look back. That was until her best friend goes missing the day before graduation. Chloe’s disappearance brings back haunting memories of her father, and through the help of some unexpected new friends, the story of who he was and what she’s meant to be unfolds.

With a living, breathing, nightmare determined to destroy her, Mira knows the only way to survive is to accept her fate and meet this demon in battle.

This is the fourth of Erin Manbeck’s books that I have read.   Dreamless is a stand alone, where the first three were The Gifted Trilogy.   I loved them all.

Dreamless starts slow.  There is a lot of background that the reader has to know for the rest of the story to make sense.   While I love when a book pulls you in from the first page, I also enjoy knowing the entire story.    Make it through the first part of this book and you will not be able to put it down.
I was truly invested in Mira’s life.   I wanted to know if she comes to terms with her dad’s death.  Did Mira figure out what the guardian angel was telling her, solving all of the riddles being thrown at her?   Could she be strong enough to prove herself a talented fighter?   I also loved her relationship with her mother.   While it is not a huge part of the story, I found myself comparing their relationship to that of my family’s.    They had a great sense of humor and were able to talk about anything, which is what every mom wants to have with their daughter.

The romance in this story was typical high schooler.  Hot and steamy, whiling holding back and taking caution not to move too fast too quickly.    I enjoyed seeing the couples circle each other and then finally admit their feelings, but still knowing there was too much happening for them to move too fast.   I am not sure I could be as open and accepting as Mira’s mom, but I did like that instead of criticizing she supported and gave sound advice.

Erin Manbeck is an author I will not hesitate to recommend to anyone looking for a great paranormal story.    I happily and totally recommend Dreamless.