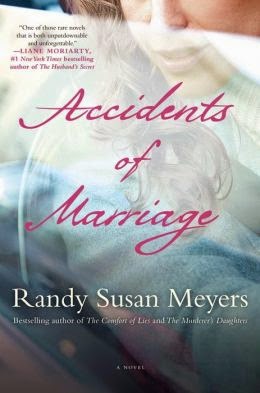 Accidents of Marriage explores a topic rarely shown in fiction: the destruction left in the wake of spouse’s verbal fury. Ben never meant to hurt Maddy. He never imagined his recklessness would lead to tragedy.

Maddy is a social worker trying to balance her career and three children. Years ago, she fell in love with Ben, a public defender, drawn to his fiery passion, but now he’s lashing out at her during his periodic verbal furies. She vacillates between tiptoeing around him and asserting herself for the sake of their kids – which works to keep a fragile peace – until the rainy day when they’re together in the car and Ben’s volatile temper gets the best of him, leaving Maddy in the hospital fighting for her life.

“It's amazing how warm Meyers' writing is even as her stories grip you by the hand and don't let go.”
—Jenna Blum, New York Times bestselling author, Those Who Save Us
“[Meyers] has managed to make us empathize with every member of this damaged family. This is an important story.”
—Brunonia Barry, New York Times and international bestselling author, The Lace Reader and The Map of True Places

“A bold and poignant look into the complicated, slippery world of what constitutes emotional abuse. Meyers …didn't let me go until the extremely satisfying end.”
—Amy Hatvany, author, Safe with Me

“Meyers captures the necessity and complexity of excavating the truth as the foundation of life moving forward.”
—Janet Cromer, author, Professor Cromer Learns to Read:
A Couple's New Life after Brain Injury
Posted by A Soccer Mom's Book Blog at 5:00 AM