Review for The Vineyards of Champagne by Juliet Blackwell

The Vineyards of Champagne
by
Juliet Blackwell 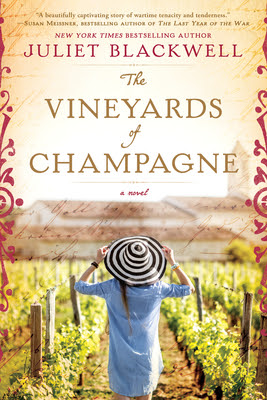 Beneath the cover of France's most exquisite vineyards, a city of women defy an army during World War I, from the New York Times bestselling author of The Lost Carousel of Provence....

Deep within the labyrinth of caves that lie below the lush, rolling vineyards of the Champagne region, an underground city of women and children hums with life. Forced to take shelter from the unrelenting onslaught of German shellfire above, the bravest among them venture out to pluck sweet grapes for the harvest. But wine is not the only secret preserved in the cool, dark cellars...

In present day, Rosalyn travels to Champagne to select vintages for her Napa-based employer. Rosalyn doesn't much care for champagne--or France, for that matter. Since the untimely death of her young husband, Rosalyn finds it a challenge to enjoy anything at all. But as she reads through a precious cache of WWI letters and retraces the lives lived in the limestone tunnels, Rosalyn will unravel a mystery hidden for decades...and find a way to savor her own life again, inspired by the hope and defiance of the women who toiled to bring in the grape harvest during the war.

I have always thought WWII was my time but I am coming to realize that WWI was just as intriguing. I love hearing about the history of a place that has always been known for its amazing champagne but has so much more history to learn about.

The letters that were read in the present time bring to light a history story that you would never find in a classroom and makes the WWI era so much more real.   The art of writing letters is lost to many with all the present technology but in the time of war that was the only way to send messages of love and support to those who were fighting.  I love that people stepped up and wrote to the soldiers that they didn’t even know, it proved that humanity was strong even when the world was at war.     Love could withstand anything, friendships were formed, and unfortunately, friendships were lost but most of all people cared, they wanted to help in even the smallest way and were willing to do whatever they could to support the soldiers in their times of need.

The present story of Rosalyn was just as important.  She was grieving the loss of her husband, working a job that she didn’t love, and traveling to a place that she didn’t enjoy.   In France, she found new friendships, discovered that she did like champagne, and learned that she could be happy again.    She also helped a new friend solve the mystery of her ancestry.   Rosalyn put herself in positions that were uncomfortable and learned that a little discomfort can have great results.   I was excited to see her grow and open her heart up to new friendships.

The Vineyards of Champagne is an amazing historical fiction book with the dual timelines, the wonderful settings, and the amazing characters it is a must-read.