Win a copy of Chance Harbor by Holly Robinson 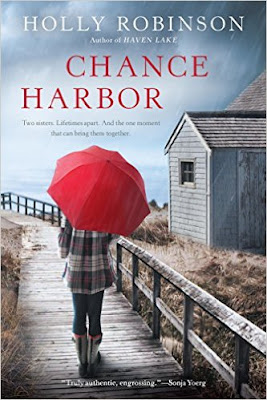 From the acclaimed author of Beach Plum Island and The Wishing Hill... "No one does it better than Holly Robinson.”—Susan Straight, National Book Award Finalist and Author of Between Heaven and Here

Catherine and Zoe are sisters, but even their mother, Eve, admits her daughters are nothing alike. Catherine is calm and responsible. Zoe is passionate and rebellious.  Nobody is surprised when Zoe gets pregnant, drops out of college, and spirals into drug addiction.

One night Catherine gets a call from Zoe’s terrified daughter, Willow, saying her mother has abandoned her in a bus station and disappeared. Eve blames herself, while Catherine, unable to have children, is delighted to raise Willow as her own.
a Rafflecopter giveaway 33; font-family: Arial, sans-serif; font-size: 14px; line-height: 22.4px;">
Now, five years later, Eve is grieving her husband’s death and making reluctant plans to sell the family’s beloved summer home on Prince Edward Island. But a series of unexpected revelations will upend the family and rock three generations of women.