I’m Glad About You by Theresa Rebeck 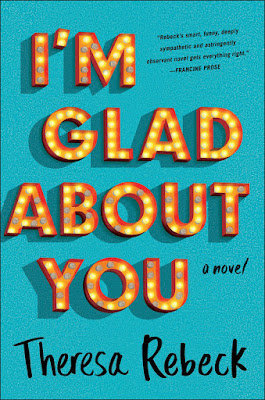 Their meeting in a parking lot outside a high school football game was both completely forgettable and utterly life-changing.  Because no matter how you look at it, it is piss-poor luck to meet the love of your life before your life has even started. Fierce and ambitious, Alison is determined to shed her Midwestern roots and emerge an actress. Kyle, all heart and spiritual yearning, believes medicine can heal the world. What could these mismatched souls have to do with each other? Everything and nothing. Even as their fates rocket them forward and apart, neither can fully let go of the past.

When Alison gets her lucky break in New York City, she ends up on the fast track to stardom and a world far more different from Cincinnati than she could have ever imagined. Back home in Ohio, Kyle marries in haste and repents at leisure. Reluctantly embracing life in suburban hell, he becomes a pediatrician. While Kyle’s dreams begin to molder, Alison learns that the spotlight is always circled by shadows. As their lives inevitably intersect, Alison and Kyle must face each other in the revealing light of their decisions. I’m Glad About You is a glittering study of how far the compromises two people make will take them from the lives they were meant to live.

I’m Glad About You is an okay book.    I wanted to love it, to be so enthralled I couldn’t put it down, but that didn’t happen.     There should have been that moment where I went awe, yea, I was waiting for this.    I was waiting and waiting and waiting and it just didn’t come.     The characters were decent, the potential for greatness was there.     Theresa Rebeck has a great idea it just didn’t come through the way I wanted it to.

Allison and Kyle were characters that some will like.   I felt like they were living secret lives.   They wanted each other, they circled around each other, and they acted like children to each other.   It was not a good friendship, relationship, or way to live your life.     Both characters regretted choices, as most people do, made in the past and went on to live unfulfilling lives.     I do believe that the characters learned a lot about themselves and had personal growth, but it just wasn’t enough.

The story could have gone a few ways.    I don’t think there was a good ending.    There was no closure for either characters and they both needed it as did I as the reader.

As with any story that I didn’t love, I believe there are people who will rave and love this book.     Everyone is entitled to their opinions and this is mine.   I hope that there are many more opinions given about this book that are more favorable.    Every reader has their own taste and favorites.    Every book has readers that love it and some that don’t.     Please give this book a chance and check it out.   Make your own opinions. 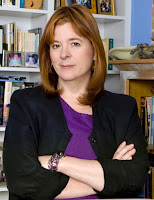 ABOUT THE AUTHOR: In 2011 Theresa Rebeck was named one of the 150 Fearless Women in the World by Newsweek. She has had more than a dozen plays produced in New York, including Omnium Gatherum (cowriter), for which she was a Pulitzer Prize finalist, and The New York Times has referred to her as "one of her generation's major talents." She was the creator of the NBC drama Smash and has a long history of producing and writing for major television and film successes. She is the author of Three Girls and Their Brother (2008) and Twelve Rooms with a View (2010). She has taught at Brandeis University and Columbia University and lives in Brooklyn with her family.

INCREDIBLE EARLY PRAISE FOR I’M GLAD ABOUT YOU:
“Theresa Rebeck’s smart, funny, deeply sympathetic, and astringently observant novel gets everything right—what we say and don’t say, how we see ourselves and how we want to be seen, the dream and the realities of love, the rewards that are offered and thesacrifices required from anyone who wants to lead an interesting and meaningful life: in the theater, in the city, in the world.” — Francine Prose, author of Lovers at the Chameleon Club

“Nobody writes more fiercely and honestly about show business than Theresa Rebeck. Allison, the heroine of this novel, discovers that answered prayers can be as frustrating as unanswered ones. Her journey made me laugh and cry.”— Erica Jong, New York Times-bestselling author of Fear of Flying

“This novel is wise. And funny. And brave. Rebeck skewers her targets with fierce wit and impeccable timing. But her dry-eyed empathy for those who follow brittle dreams is what resonates. Haunted by the ideals they've abandoned, her characters are dogged, often courageous, and thoroughly human.”— Rachel Urquhart, author of The Visionist

“A rare honest story about love, ambition, and compromise. . . . The snappy dialogue and plot you'd expect from a veteran dramatist plus the rich exploration of character that novels are made for.” — Kirkus Reviews (starred review)

“Like Nick Hornby and David Nicholls, Rebeck possesses an effortless prose style that edifies as much as it entertains...Rebeck delivers some hilarious riffs on the venal nature of show business, even as she also imparts some hard truths on the need for compromise in relationships.” — Booklist