The Widow by Fiona Barton 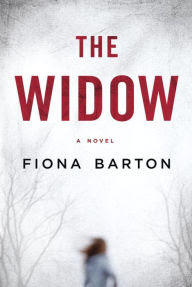 When the police started asking questions, Jean Taylor turned into a different woman. One who enabled her and her husband to carry on, when more bad things began to happen...

But that woman’s husband died last week. And Jean doesn’t have to be her anymore.

There’s a lot Jean hasn’t said over the years about the crime her husband was suspected of committing. She was too busy being the perfect wife, standing by her man while living with the accusing glares and the anonymous harassment.

Now there’s no reason to stay quiet. There are people who want to hear her story. They want to know what it was like living with that man. She can tell them that there were secrets. There always are in a marriage.

The truth—that’s all anyone wants. But the one lesson Jean has learned in the last few years is that she can make people believe anything…

The Widow is Fiona’s debut book.   I started reading with no expectations only hope that I would love this book.    I didn’t love it, but I liked it a whole lot.

I had a hard time attaching myself to any of the characters.    The characters were not likable.   Jean was just a shadow.    She did what she was told by whoever told her without voicing any questions.    She asked questions in her head but didn’t follow through on any of them.    Glen was plain old creepy.   A man who watches child porn and like naughty pictures of children is never a good guy.    Then there is Dawn, the mother of the child who was kidnapped.    She was just stupid.   Who leaves a 2 year old alone in their front yard?     Sure, she felt bad about her being gone and was devastated.    But I just couldn’t relate or feel very much sympathy for her.      The police were even scarier; they tried to put the effort in.   It just seems they came up short at every clue.    If it had been my child I would have been screaming in frustration at the lack of hard work by the police.

All of that being said I could not put the book down and am glad that I picked up The Widow to read.     I was never quite sure who the kidnapper was.    The guesses kept coming and I picked up on many clues, but they could have led to any number of characters.   I enjoyed that.   I liked the not knowing.   It kept me reading and needing to know all the answers to my questions.     I still have questions and doubts as to the ending of the story.

Over all this is a good debut novel and I look forward to more from Fiona.   I recommend checking out The Widow.

I can hear the sound of her crunching up the path. Heavy footed in high heels. She’s almost at the door, hesitating and smoothing her hair out of her face. Nice outfit. Jacket with big buttons, decent dress underneath and glasses perched on her head. Not Jehovah's Witnesses or the Labour party. Must be a reporter but not the usual. She’s my second one today - fourth this week, and it’s only Wednesday. I bet she says “I’m sorry to bother you at such a difficult time”. They all say that and put on that stupid face. Like they care.

I’m going to wait to see if she rings twice. The man this morning didn’t. Some are obviously bored to death with trying.  They leave as soon as they take their finger off the bell, marching back down the path as fast as they can, into their cars and away. They can tell their bosses they knocked on the door but she wasn't there. Pathetic.

She rings twice. Then knocks loudly in that rap rap rappity rap way. Like a policeman. She sees me looking through the gap at the side of my net curtains and smiles this big smile. A Hollywood smile, my mum used to say. Then she knocks again.

When I open the door, she hands me the bottle of milk from the doorstep and says “You don't want to leave that out, it'll go off. Shall I come in? Have you got the kettle on?”

I can't breathe, let alone speak. She smiles again, head on one side. “I'm Kate”, she says. “Kate Waters, a reporter from theDaily Post.”

“I know who you are,” she says. Unspoken are the words:  “You are the story.”

“Let’s not stand out here,” she says. And as she talks, somehow, she’s come in.

I feel too stunned by the turn of events to speak and she takes my silence as permission to go into the kitchen with the bottle of milk and make me a cup of tea. I follow her in - it’s not a big kitchen and we’re a bit of a squeeze as she bustles about filling the kettle and opening all my cupboards, looking for cups and sugar. I just stand there, letting it all happen.

She’s chatting about the units, “What a lovely fresh-looking kitchen – I wish mine looked like this. Did you put it in?”

I say “Yes, we chose white doors and red handles because it looked so clean”. I’m standing in my house discussing kitchen units with a reporter. Glen would’ve had a fit.

She says “Through here, is it?” and I open the door to the living room.

I’m not sure if I want her here or not – not sure how I feel. It doesn’t feel right to protest now - she’s just sitting and chatting with a cup of tea in her hand. It’s funny, I’m quite enjoying the attention. I get a bit lonely inside this house now that Glen is gone.

And she seems to be in charge of things. It’s quite nice really, to have someone in charge of me again. I was beginning to panic that I’d have to cope with everything on my own but Kate Waters is saying she’ll sort everything out.

All I have to do is tell her all about my life, she says.

My life? She doesn't really want to know about me. She hasn't walked up my path to hear about Jean Taylor. She wants to know the truth about him. About Glen. My husband.

You see, my husband died last week. Knocked down by a bus just outside Sainsbury's. He was there one minute, giving me grief about what sort of cereal I should’ve bought, and the next, dead on the road. Head injuries, they said. Dead, anyway. I just stood there and looked at him, lying there. People were running round finding blankets and there was a bit of blood onthe pavement. Not much blood though. He would’ve been glad. He didn't like any sort of mess.

Everyone was very kind and trying to stop me seeing his body but I couldn’t tell them I was glad he’d gone. No more of his nonsense.