Book Review for Where the Sky Begins by Rhys Bowen

Where the Sky Begins by Rhys Bowen 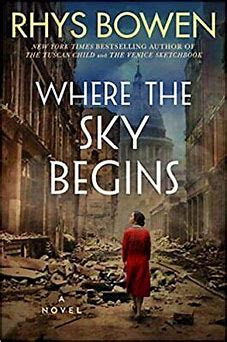 Taken from Goodreads:  A woman’s future is determined by fate and choice in a gripping WWII novel about danger, triumph, and second chances by the New York Times bestselling author of The Venice Sketchbook and The Tuscan Child.

London, 1940. Bombs fall and Josie Banks’s world crumbles around her. Her overbearing husband, Stan, is unreachable, called to service. Her home, a ruin of rubble and ash. Josie’s beloved tearoom boss has been killed, and Josie herself is injured, with nothing left and nowhere to go.

Evacuated to the English countryside, Josie ends up at the estate of the aristocratic Miss Harcourt, a reluctant host to the survivors of the Blitz. Awed as she is by the magnificent landscape, Josie sees opportunity. Josie convinces Miss Harcourt to let her open a humble tea shop, seeing it as a chance for everyone to begin again. When Josie meets Mike Johnson, a handsome Canadian pilot stationed at a neighboring bomber base, a growing intimacy brings her an inner peace she’s never felt before. Then Stan returns from the war.

Now a threat looms larger than anyone imagined. And a dangerous secret is about to upend Josie’s life again. Her newfound courage will be put to the test if she is to emerge, like a survivor, triumphant.

My Thoughts:  I read everything WWII and especially when WWII is written by Rhys Bowen.   As with other books by the same author, I was pulled right in and never came back up for air.  I was there, in London with bombs falling around me, in the countryside with the crabby aristocrat, and alongside Josie as she found her way through a world full of unknowns.

I never forgot that this book was happening during a war but there was so much more to this book.   The relationships that Josie managed to make are wonderful.  The nurse in the hospital that makes sure that Josie gets out of London safely, the young children that she befriends on her trip to the countryside, and the town people in the town are all people that make a difference to Josie, they are friends that she did not have when she left London, they are people who look out of each other and include Josie in their circle of people who matter.  These other people help Josie find a way to be happy during a time of so much hardship. 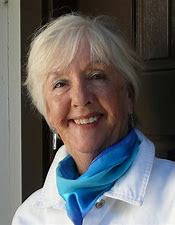 Meet Rhys Bowen (Taken from her website):  Rhys Bowen is the New York Times bestselling author of more than forty novels, including The Victory Garden, The Tuscan Child, and the World War II-based In Farleigh Field, the winner of the Left Coast Crime Award for Best Historical Mystery Novel and the Agatha Award for Best Historical Novel. 2021’s The Venice Sketchbook was nominated for the Edgar Award for Best Novel of the Year. Bowen’s work has won over twenty honors to date, including multiple Agatha, Anthony, and Macavity awards. Her books have been translated into many languages, and she has fans around the world, including over 60,000 Facebook followers. A transplanted Brit, Bowen divides her time between California and Arizona.
Posted by A Soccer Mom's Book Blog at 6:00 AM