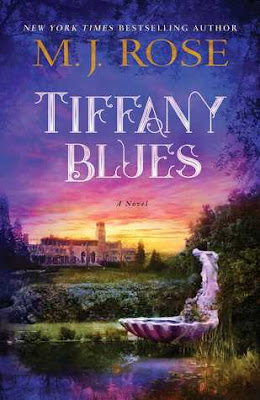 New York, 1924. Twenty‑four‑year‑old Jenny Bell is one of a dozen burgeoning artists invited to Louis Comfort Tiffany’s prestigious artists’ colony. Gifted and determined, Jenny vows to avoid distractions and romantic entanglements and take full advantage of the many wonders to be found at Laurelton Hall.

But Jenny’s past has followed her to Long Island. Images of her beloved mother, her hard-hearted stepfather, waterfalls, and murder, and the dank hallways of Canada’s notorious Andrew Mercer Reformatory for Women overwhelm Jenny’s thoughts, even as she is inextricably drawn to Oliver, Tiffany’s charismatic grandson.

As the summer shimmers on, and the competition between the artists grows fierce as they vie for a spot at Tiffany’s New York gallery, a series of suspicious and disturbing occurrences suggest someone knows enough about Jenny’s childhood trauma to expose her.

Supported by her closest friend Minx Deering, a seemingly carefree socialite yet dedicated sculptor, and Oliver, Jenny pushes her demons aside. Between stolen kisses and stolen jewels, the champagne flows and the jazz plays on until one moonless night when Jenny’s past and present are thrown together in a desperate moment, that will threaten her promising future, her love, her friendships, and her very life.

When I start a book that everyone is talking about I am always worried that it won’t live up to the hype, that I won’t like it as much as everyone else, and that it just won’t be all that for me.  I was pulled into a world that I didn’t know much about.   The world of art is a virtual unknown to me; I go to museums but have never studied art.     Yet, I was invested in Jenny, Oliver, and Minx.   I wanted them to figure out their lives and find their happy ending.

Tiffany Blues is a light romance book with some mystery and history. The story was not a quick read and usually I struggle to finish slower books.    With Tiffany Blues, I didn’t feel the must-read feeling that I have with other books but I knew that I had to read until the very end.    I anticipated that there would be twists, turns, and so many other unknowns to be discovered before the book came to an end.

M.J. Rose is an author that I look to for a gothic and historical feel and I’m not sure this had as much of a gothic feeling as her other books have.    With all that being said this is a book that I do recommend reading.

**ARC was provided by the publisher via Netgalley in exchange for an honest review.
Posted by A Soccer Mom's Book Blog at 3:00 AM