REVIEW of Our House by Louise Candlish 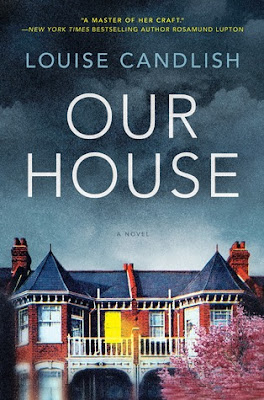 On a bright January morning in the London suburbs, a family moves into the house they’ve just bought in Trinity Avenue.

Nothing strange about that. Except it is your house. And you didn’t sell it.

When Fiona Lawson comes home to find strangers moving into her house, she's sure there's been a mistake. She and her estranged husband, Bram, have a modern co-parenting arrangement: bird's nest custody, where each parent spends a few nights a week with their two sons at the prized family home to maintain stability for their children. But the system built to protect their family ends up putting them in terrible jeopardy. In a domino effect of crimes and misdemeanors, the nest comes tumbling down.

Now Bram has disappeared and so have Fiona's children. As events spiral well beyond her control, Fiona will discover just how many lies her husband was weaving and how little they truly knew each other. But Bram's not the only one with things to hide, and some secrets are best kept to oneself, safe as houses.

Our House is a psychological book.    There seems to be the other shoe just hanging out of reach.    The reader knows that something is going to happen, there is some crazy and wonderful twist just around the next page.      Louise Candlish did an amazing job keeping the reader wondering but giving them enough clues to keep them guessing as to where the story is going.

The chapters are written by Fiona, the wife, in a podcast form and Bram, the husband, in a letter form.     They were both easy to follow, easy to understand, and enlightening as to what each were thinking at the time.     I liked that I could know what each person was thinking when something was going on.     It was also interesting to see how they perceived different events affecting each other.    Bram seemed to know Fiona very good but he had kept many many secrets from Fiona that caused her view of him to not be quite so true to character.

Our House is on my list of the best of 2018.   I could not put the book down, I was intrigued from the beginning, and was excited by the ending.   This is a book that I will recommend over and over again to anyone and everyone who says hmm…what should I read next?  The answer is easy Our House by Louise Candlish.

Advance Praise for OUR HOUSE

“The last line will make you literally shout with shock.”


—Good Housekeeping
Posted by A Soccer Mom's Book Blog at 3:00 AM