And in Marched the King’s Elite by Virginia Heath 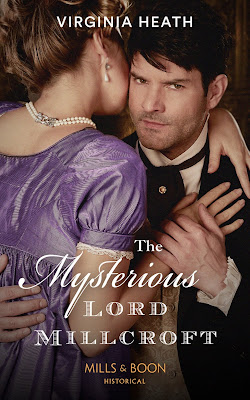 The King’s Elite is an organisation I entirely made up. I wanted to write a book about spies and I wanted to write a book about smugglers, so decided to amalgamate the two for the final book of my Wild Warriners quartet- A Warriner to Seduce Her. I made the youngest Warriner brother a particular sort of spy who specialised in infiltrating dangerous smuggling rings and as far as I was concerned, that was that.

Except during the first chapter of that book it became quite apparent it wasn’t. I suddenly had four more characters, all King’s Elite agents and side characters in that book, who I also fell in love with. Leatham, Flint, Gray and Hadleigh. Their crusty, no-nonsense superior Lord Fennimore made five. I knew I had to write another series to give all five of those agents their own happily ever afters too. To that end, I’ve spent the last twelve months completely immersed in their world.

Seb Leatham’s story is The Mysterious Lord Millcroft. Seb is highly skilled at blending into the shadows and pretending to be someone he isn’t. He specialises in becoming invisible people- servants, grooms, homeless people. He avoids anything that involves socialising because he’s painfully shy. Especially around women.

It was fun writing a shy hero. So often, they are brash, confident and outgoing and I do like to mix things up. In fact, Seb’s shyness is a major plot point and the sole reason why he and the heroine are thrust together.

The hero of the second book, The Uncompromising Lord Flint, is a different kettle of fish. A career-focussed spy, he is cool, calm and collected. Completely unflappable- until he meets the fiery heroine who drives him up the wall. Then comes Lord Gray- the joker in the pack. A man who lives wholly in the moment and acts far too often on impulse. That third book also sees their curmudgeonly superior Lord Fennimore finally meet his match, so there are two romances for the price of one there. And right now, I am writing the final book in the quartet. Lord Hadleigh is the inscrutable lawyer whose unreadable façade hides a man with a heart of gold. All in all, my King’s Elite travel to London, France, Sussed, Cornwall, Devon and Suffolk, they deal with criminals, murderers, traitors, suspects and one mad but adorable dog. It’s been a fun twelve months.

Life as a duchess… Or something much more dangerous…?
Constantly told her beauty and charm is all she has to offer, Lady Clarissa is intent on marrying a duke. And intriguing spy Sebastian Leatham will help her! Only first she’ll assist him with his new assignment—playing the part of confident aristocrat Lord Millcroft. Sebastian awakens a burning desire within Clarissa which leaves her questioning whether becoming a duchess is what she truly longs for…

Life as a duchess…

Or something much more dangerous…?
Part of The King’s Elite. Constantly told her beauty and charm is all she has to offer, Lady Clarissa is intent on marrying a duke. And intriguing spy Sebastian Leatham will help her! Only first she’ll assist him with his new assignment—playing the part of confident aristocrat Lord Millcroft. Sebastian awakens a burning desire within Clarissa which leaves her questioning whether becoming a duchess is what she truly longs for…

Author Bio – Virginia Heath lives on the outskirts of London with her understanding husband and two, less understanding, teenagers. After spending years teaching history,she decided to follow her dream of writing for Harlequin. Now she spends her days happily writing regency romances, creating heroes that she falls in love with and heroines who inspire her. When she isn't doing that, Virginia likes to travel to far off places, shop for things that she doesn't need or read romances written by other people.