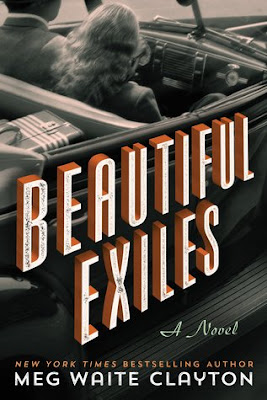 From New York Times bestselling author Meg Waite Clayton comes a riveting novel based on one of the most volatile and intoxicating real-life love affairs of the twentieth century.

Key West, 1936. Headstrong, accomplished journalist Martha Gellhorn is confident with words but less so with men when she meets disheveled literary titan Ernest Hemingway in a dive bar. Their friendship—forged over writing, talk, and family dinners—flourishes into something undeniable in Madrid while they’re covering the Spanish Civil War.

Martha reveres him. The very married Hemingway is taken with Martha—her beauty, her ambition, and her fearless spirit. And as Hemingway tells her, the most powerful love stories are always set against the fury of war. The risks are so much greater. They’re made for each other.

With their romance unfolding as they travel the globe, Martha establishes herself as one of the world’s foremost war correspondents, and Hemingway begins the novel that will win him the Nobel Prize for Literature. Beautiful Exiles is a stirring story of lovers and rivals, of the breathless attraction to power and fame, and of one woman—ahead of her time—claiming her own identity from the wreckage of love.

I will never claim to have a great literary knowledge and this book just proves it.   Ernest Hemingway is a well-known author and I am pretty unfamiliar with his work.   I am not familiar at all with his history and have no knowledge of his personal life.    So when I picked up Beautiful Exiles I was entirely unsure what I was going to be reading.    While I still will not claim to be a know it all about Hemingway I will say that I had my eyes opened as to how selfish, demanding, and drunken he is.     I was amazed at how he treated those around him and how he thought he was a big gun (which he was in his time) so therefore he deserved special privilege.   The part of the story that stuck with me was when he took Martha’s press privileges away by claiming them as his own and then not being able to get to the front lines and tell the real story.

I found this book to be a slow read but enthralling read.  I was invested in Martha’s story.   I was invested in the era.   And I was invested in knowing how it would all end for her.     The settings were shared in such detail I could picture the different cities, I could see how the world had changed due to the war, and I could feel the emotion that was felt while visiting them.      I enjoyed that some of the cities were visited pre-war and then revisited after the war had hit them or while the war had was going on and you could feel the difference in the people, the city, and the feelings.

Beautiful Exiles is an amazing, eye-opening, heart string pulling story.   I am excited to be sharing it and am looking forward to reading more of Meg Waite Clayton’s book.