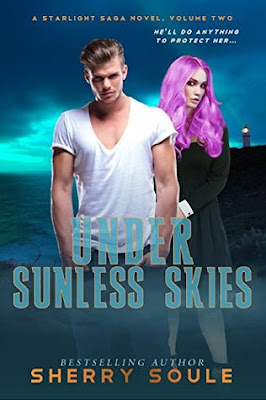 True love is hard. And a doomed relationship with epic trust issues and shady secrets? Even harder.

For Sloane Masterson, her forbidden love with Hayden Lancaster has been a series of highs and lows that is overly complicated by those annoying interstellar dating laws.

But once Sloane discovers a shocking family secret, she won’t let those lame rules get in her way—she’s on a mission to win back her hybrid!

After receiving creeptastic blackmail messages, Sloane’s life becomes a real-life horror movie. And as if that wasn’t bad enough, Hayden slimes her with smelly ectoplasm and freaky mutants start tracking her every move. Insert one more major disaster…the unexpected arrival of Sector Thirteen.

If she hopes to survive all the crazy with Hayden at her side, Sloane needs to expose the blackmailer and get that potent residue off her skin—fast. Because with Sector Thirteen’s monsters hunting her, Sloane’s not going down without a fight, even if that means trusting the one boy who broke her heart.

*This series is intended for upper-YA readers, has lots of steamy romance and campy humor, and is not considered hardcore science fiction.

Sloane and Hayden…high schoolers in a crazy on again and off again relationship, there were times I couldn’t remember which way they were, but in love.     The jealousy, the questions, and the drama were all right on with the high school world.   The way that Sherry Soule portrays the high school characters is so real to life.  The feelings, the reactions, and the friendships are perfect.

The pace of the story is perfect.   There is background given on why Sloane and Hayden can or cannot be together that add twists and turns that I didn’t see coming.  There are expectations of the future for them both that could change the course incredibly or push them over mountains of obstacles.    I have to believe their relationship is strong enough to withstand whatever is thrown at them.   I guess I will have to wait until book three arrives to find out if I am right in this.

This is a series that does have to be read in order and I recommend picking up both book one and book two right away.