My Song for You (Pushing Limits #2) by Stina Lindenblatt 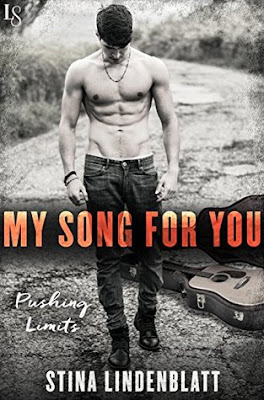 In a poignant romance from the author of This One Moment(“Hot, intense, and filled with emotion.”—Rachel Harris), the rock stars of Pushing Limits have hit the big time. But fame gets tough when love presents a fork in the road.

At twenty-one, Jared Leigh had been prepared to give up the life of a touring musician to be a father after getting his girlfriend pregnant. When she told him that she’d gotten an abortion, Jared was devastated. Now at least he has the groupies to keep him company—until a blast from the past rocks his world.

Callie Talbert hasn’t seen her sister’s ex since high school. But after Callie bumps into Jared while she’s grocery shopping with four-year-old Logan, there’s a spark that wasn’t there before. Jared quickly realizes that her deaf “son” is the same age his own child would have been. When Jared demands to know more about Logan, Callie panics. There are things she just can’t tell him. Besides, Jared’s a bad-boy rocker, not a dependable father figure. He’ll move on to his next gig soon enough . . . right?

Trouble is, Jared refuses to be pushed away, and the more quality time he spends with Logan, the more he’s captivated by the woman Callie has become. When the truth is revealed, Jared only hopes that the three of them have what it takes to become a real family.

I picked up this book knowing that I loved the first book in this series and was hoping for more of the same.    I finished the book so happy that it was an entirely different story, with characters from the first book making an appearance, and an amazing ending.

Jared is a band member of Pushing Limits, an up and coming band that is headed for the big time.     Callie is a single mom with a HUGE secret.    I knew that I wanted these two to be together but I was hoping that it would be for all the right reasons.      The high school crush that Callie kept a secret was not reason enough for her to fall all over Jared.    Jared needed to truly love Callie before they could be together.     These are just a few of the reasons that these two needed to figure out what they both wanted before they could be happy.     Stina Lindenblatt did a great job of telling their stories.

I really enjoy that all the characters in this series are real.    They have families, they have feelings, they have needs and wants, and they have struggles.    The struggles they have are not so far out there that they are not “normal.”   The families and feelings are exactly what a “normal” person would have on a day to day basis.     Even though there is a band with groupies and touring, there is not the partying and drugs that seem to go hand in hand with a lot of bands.

While My Song for You is part of a series only the characters are in both.   Each book has its own story with its own main characters making them standalone books.     I recommend reading this series, you can start with My Song for You.
Book Links
Amazon   |   Goodreads   |   Barnes and Noble