Soul of a Crow (Dove #2) by Abbie Williams 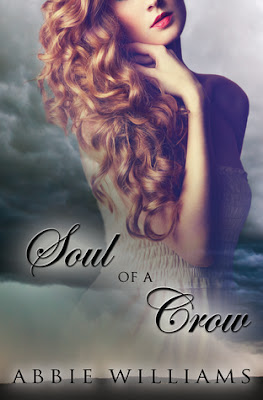 It is 1868. The country is still reeling from the brutal effects of the Civil War, just a few short years earlier. Lorie Blake, a beautiful young woman orphaned by the War, and who escaped the miserable prison of her life as a prostitute in a Missouri whorehouse, now takes wing, embarking on a breathtaking overland journey northwest. With Lorie is her newfound family – brothers Boyd and Malcolm Carter, experienced horseman Sawyer Davis, and his beloved paint mare, Whistler. For the first time in years, there seems reason to hope. Thrown together by the circumstances of fate, and now deeply bound by love, each of them are determined to begin new lives as homesteaders in Minnesota.

But alas, the past refuses to die quietly. Former Confederate soldiers Sawyer and Boyd are haunted by the scavenger-like specters of a War that refuses to stay buried, a conflict never truly put to rest. New friends emerge and old enemies arise, as ancient hatreds boil over in the hearts of the men who survived. In the face of incredible odds, Lorie must rely upon all of the emotional strength in her soul as she battles for the life of her true love, and towards the enduring promise of a new beginning in the north.

Post Civil War we find Lorie traveling with Southern was veterans Sawyer and Boyd and Malcolm, Boyd’s brother towards Minnesota.   This is the second book in the Dove series and continues where book one ended.     Soul of a Crow is not a Civil War story it is the story of prejudices against southerners by northerners and northerners against southerners.    It is also the story of love.    The love between Sawyer and Lorie.    There are obstacles in their way.

I found it interesting how many things got in the way of Lorie and Sawyer’s love.   They couldn’t find a preacher to marry them, the owner of the business Lorie worked at has people chasing her to bring her back, Sawyer is accused of crimes he did not commit, and so much more.     There were times I wondered if they would ever find their happy ever after.    I don’t know that I have ever read a story with so many horrible things happening to the main characters.

When reading it a series it is sometimes hard to continue the story when there is time between the release of the first book and the second book.    I started this book after looking back at what I thought of book one (look HERE to see what I thought) and was brought right back into the characters life.    I was pulled right back into the lives and travels of these characters.     I was invested in their well being.

Abbie Williams has done her research to make the scenes realistic to the era.   The speaking was easy to follow, the characters were easy to relate to, and the storyline was wonderful.    There is a book three yet to come and I cannot wait to read more of this story. 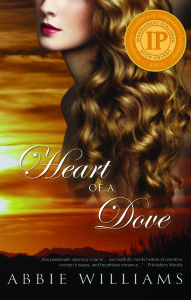 The Civil War has ended, leaving the country with a gaping wound. Lorie Blake, a southern orphan sold into prostitution at fifteen, has carefully guarded her aching soul from the disgrace forced upon her every evening. Two years have passed, leaving her with little hope of anything more. Meanwhile, three men – longtime friends – and a young boy with a heart of gold are traveling northward, planning to rebuild their lives in the north and leave behind the horrors of their time as soldiers in the Confederate Army. Fate, however, has plans of its own, causing their lives to collide in a river town whorehouse. Forced to flee, Lorie escapes and joins them on the journey north. But danger stalks them all in the form of a vindictive whorehouse madam and an ex-Union soldier, insane and bent on exacting revenge. At last, Lorie must come to terms with her past and devastating secrets that she cannot yet bear to reveal. Heart of a Dove is the first book in a gripping, sweeping romantic saga of pain, unbearable choices, loss and true love set against the backdrop of a scarred, post-Civil War America. 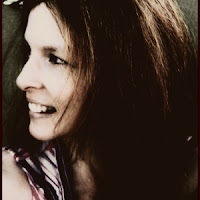 Abbie Williams has been addicted to love stories ever since first sneaking her mother's copy of The Flame and the Flower. Being an avid lover of language, history and women's studies was what prompted her to pen her sweeping historical saga, The Dove series. When she isn't writing, teaching, or taking care of her busy family, you can find her hanging out on the dock, listening to some good bluegrass music.

PRAISE
**Independent Publishers Awards Gold Medalist 2015**
"Set just after the U.S. Civil War, this passionate opening volume of a projected series successfully melds historical narrative, women’s issues, and breathless romance with horsewomanship, trailside deer-gutting, and alluring smidgeons of Celtic ESP." ~ Publishers Weekly
"There is a lot I liked about this book. It didn’t pull punches, it feels period, it was filled with memorable characters and at times lovely descriptions and language. Even though there is a sequel coming, this book feels complete." ~ Dear Author
"With a sweet romance, good natured camaraderie, and a very real element of danger, this book is hard to put down." ~ San Francisco Book Review
"This story haunted me so much I gave up trying to sleep and just finished it. It’s beautifully done, even those miserable moments that were painful to follow. We experience everything through Lorie’s point of view, including the charm of her Southern roots through flashback memories as well as the rigors of the travel through the prairie. Her relationship with the three men and the young Malcolm was special, her burgeoning romance with one of them extraordinary." ~ The Book Nympho
Posted by A Soccer Mom's Book Blog at 5:00 AM