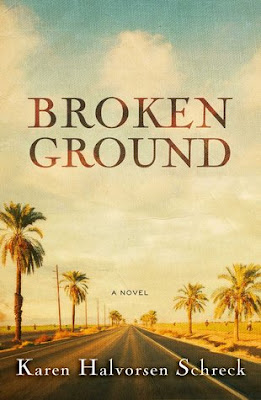 In BROKEN GROUND, Ruth, a woman from Oklahoma who is newly married and crazy in love, abruptly becomes a young widow when her husband Charlie dies in an oil production-related accident near their home in East Texas.  Ruth is forced to move back in with her disapproving, chauvinistic father and a mother who tries to keep the peace.  When an opportunity to attend a university in California on full scholarship opens up, she packs her bags and boards a train for the Pacific Coast.

Ruth is attractive and smart, and eventually catches the attention of one of her professors who recruits her as his personal assistant.  Things continue to go well for Ruth when a family friend invites her to their home for the holidays, and she develops an interest in their disabled son, Thomas.  Upon returning to school, Ruth’s life turns upside down when her professor crosses a line, but she is blamed and summarily expelled.  Instead of returning home to her narrow-minded father, she boards a bus and arrives on Thomas’s doorstep, where she asks him to bring her into the fold in a Mexican workers’ camp, where he has a teaching job.

The challenges of Ruth’s transition from student to camp worker slowly dissipate, and she soon earns the respect of the campers by attracting the interests of their children.  Eventually, Ruth teaches by Thomas’s side and helps plan ways to protest the unlawful treatment of the Mexican migrant workers.  Nighttime raids—where entire camps are bused back to Mexico—were all too common, and Ruth needs to ensure the security of the camp, workers, and her new friends.

The locations, the settings, the story, the characters…everything in this book is absolutely amazing and real to life.     The Depression era is not an easy time to live yet people did and worked together to keep families safe and healthy.    The deportation of Mexicans, both legal and illegal, in the US was happening.

While this is a fiction book I learned so much.   I learned how women were perceived in colleges when accused of things were not necessarily their fault.    I learned about how Mexican’s were treated, even when they were in the US legally, as they were sent back to Mexico.    I learned that people were living rough lives during the Depression and how they were able to keep food on the tables and families together.     This book is definitely covers some difficult times but there is so many positive things happening also.   Families are close, friends protect each other, and relationships continue to grow.

Broken Ground is not an easy book to read.  It is not a “quick read.”    Yet, I could not put it down.   I read page after page, chapter after chapter, unable to stop.   I was invested in how the Mexican’s were treated.    The people in this book became friends of mine.   I needed to know that Luis’ family would be okay.    It was important to me to see Ruth come to terms with the loss of her husband.    I was hoping that Thomas would be able to help enough Mexicans and come to accept Lupe’s leaving.


I recommend checking out Broken Ground.   It is an amazing book by and equally amazing author.

ABOUT THE AUTHOR:
Karen Halvorsen Schreck is the author of the historical novel Sing For Me (Simon & Schuster), which was praised in a Publishers Weekly starred review. She received her doctorate in English and Creative Writing from the University of Illinois at Chicago. Schreck teaches writing and literature and lives with her husband, photographer Greg Halvorsen Schreck, and their two children in Wheaton, Illinois.

"Readers interested in immigration issues and US history will discover much to enjoy in Schreck's well-written, lyric novel...Readers will love Ruth's stamina and heart, and come away with a new understanding of immigrant experiences both then and now." —Publishers Weekly

"The characters remind the reader that while the world is full of broken people, promises and ground, there is hope. Ruth is an encouraging character who finds herself after losing everything." —RT Book Reviews

"A  compelling story, emotionally honest and beautifully written." —Joshilyn Jackson, New York Times bestselling author of The Opposite of Everyone

“Engaging, lyrical, and inspirational, this is a novel for anyone interested in American history, immigration, gender studies, agriculture, or just a good story about human relationships and all the different directions life can go.” —Julie Cantrell, New York Times and USA Today bestselling author of The Feathered Bone