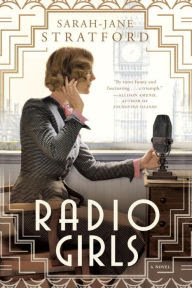 The Great War is over, and change is in the air, in this novel that brings to life the exciting days of early British radio…and one woman who finds her voice while working alongside the brilliant women and men of the BBC.

London, 1926. American-raised Maisie Musgrave is thrilled to land a job as a secretary at the upstart British Broadcasting Corporation, whose use of radio—still new, strange, and electrifying—is captivating the nation. But the hectic pace, smart young staff, and intimidating bosses only add to Maisie’s insecurity.

Soon, she is seduced by the work—gaining confidence as she arranges broadcasts by the most famous writers, scientists, and politicians in Britain. She is also caught up in a growing conflict between her two bosses, John Reith, the formidable Director-General of the BBC, and Hilda Matheson, the extraordinary director of the hugely popular Talks programming, who each have very different visions of what radio should be. Under Hilda’s tutelage, Maisie discovers her talent, passion, and ambition. But when she unearths a shocking conspiracy, she and Hilda join forces to make their voices heard both on and off the air…and then face the dangerous consequences of telling the truth for a living.

The 1920’s is one of my favorite eras.   The changes are coming to the world with women getting more rights, women working in a man’s world, and so much more.      Sara-Jane Stratford has done her research.     The writing it true to the era, the characters are realistic, and the story is amazing.

Radio Girls takes place when the BBC is just starting.      I am not familiar with the BBC and the start of radio but in doing a little researched I realized that this could be a true story.    The characters are behaving as women and men did in that time.   The jobs are ones that revolve around the radio.    Even the guest speakers were real people.     I admire an author who is realistic to a time and takes liberties only to improve the story or make the story clearer to the reader.
Maisie is a great character.   Her history is not so great yet she shows her strength by moving to a different country to serve as a nurse then finding a job that she enjoys while having no formal education.     The perseverance that she shows in keeping the job and working well with Hilda proved her strength to me over and over.     There were times in her story that I felt sorry for her and the life she was forced to live but then in the next sentence I would be proud of how she managed to stand up for herself.

This is a wonderful book.     The story is well developed, the character extremely realistic, and the facts are well researched.     I look forward to reading more by Sara-Jane Stratford.