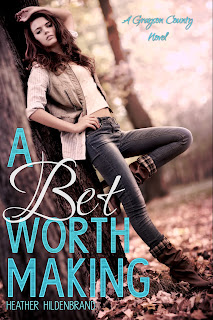 Jordan DeWalter has her future mapped out—build the most impressive architectural design portfolio in all of New England, and use it to one day open her own firm. But when her father unexpectedly passes away, her plans, and her heart, are broken. Now, if she wants the money once promised to her, she’ll have to return to the town that threw her family out over twenty years ago in order to get it.

Casey Luck has spent his life skating by on charm and a devil-may-care attitude. Never one to take life too seriously, he’s kept secret his dream of building custom dirt bikes. Instead, he fills the role his family expects: tractor mechanic, farm handyman, comedic relief. But, deep down, Casey’s restless for something more.

Then he meets his new roommate: Jordan.

Their attraction is instant, but Jordan’s not fooled by the chemistry between them. When the summer is over, she’s out of here no matter what. In fact, she’s willing to bet on it.

Will their undeniable connection be the push they both need to break free of their pasts, or will Jordan’s wager on their failure ruin the future for them both?

Heather Hildenbrand has an amazing talent for writing.    Picking up A Bet Worth Making I expect a love story, with a twist, and a lot of country fun.    That is exactly what I got from the entire story.    The story of Jordan and Casey is sweet, loving, and real.    A story that could happen in real life is a story that I can relate to.   I love when a story is realistic and wonderful. 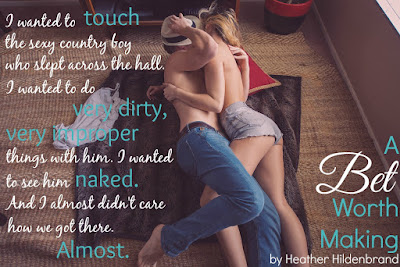 Casey and Jordan’s relationship starts with a misunderstanding and goes down from there… or goes up and to a much better place.    They fight, they flirt, they watch each other, and they try to fight their feelings for each other through almost the entire story.   I found it refreshing that the attraction was obvious from their first meeting but they didn’t just fall into bed.   It was decided that theirs was going to be more than just a quickie, at least by Casey it was.     They worked toward the relationship, they made each other be honest, and they pushed for what was important.     I felt like Casey was the “adult” in the relationship and pushed Jordan a lot, but it was necessary as Jordan was wary of everything country.

This is the second book in the series but it is a true stand alone.    There are characters that appear in both books but each book is its own story.    Of course, I recommend reading them both but at least pick up A Bet Worth Making.     Heather Hildenbrand is wonderful and talented.   I cannot wait for more.

AVAILBLE NOW!
Get A Risk Worth Taking for .99 for a limited time!