The Middle of Somewhere by Sonja Yoerg 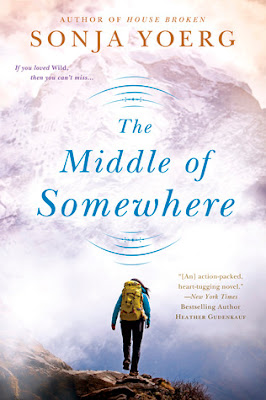 With her thirtieth birthday looming, Liz Kroft is heading for the hills—literally. Her emotional baggage weighs her down more than her backpack, but a three-week trek promises the solitude she craves—at least until her boyfriend, Dante, decides to tag along. His broad moral streak makes the prospect of confessing her sins more difficult, but as much as she fears his judgment, she fears losing him more. Maybe.

They set off together alone under blue skies, but it’s not long before storms threaten and two strange brothers appear along the trail. Amid the jagged, towering peaks, Liz must decide whether to admit her mistakes and confront her fears, or face the trail, the brothers and her future alone.

The entire story takes place on an 18 day backpacking trip on the John Muir Trail in the western United States.   It is the story of Liz who is a 29 year old engineer with a tough history and is wondering if the path she is currently on is the right path for her.    Liz is looking for some time alone with find herself and discover if she is truly happy.

Both Liz and her boyfriend, Dante, are complex characters.   Liz is struggling with the things she has done wrong in her past and trying to come to terms with them.    Dante is hanging on to Liz tightly, almost as if he is afraid of losing her.     The layers to the characters and their relationship are shown slowly.   Not so slowly that is drags, but slowly as if solving a mystery and giving clues as the story is told.   While Liz has done worse things in her past, I did not feel like it pulled her character down.   I still like her, I was cheering for a happy ending for her, and I wanted most of all for her to be comfortable and accepting of herself.      Dante was tougher for me.   I felt like he was smothering Liz at the beginning and that he could have been more understanding of her feelings.  Yet, he took what Liz told him (you have to read the book) and processed it, then accepted what could not be changed.     By the end of the book I adored Dante, I respected him, and I was cheering for him also.

This novel has everything.   Adventure, reflection, love, mystery, and thrills.   Sonja Yoerg wrote a great women’s fiction book that has something for every reader.    This is the second book by her I have read and she is definitely on my must read list.


As of December 1, 2009, According to The Federal Trade Commission (FTC),  product reviewers on blogs must disclose whether they received products for free or received payment for their review.
The books I review on this site ( A Soccer Mom's Book Blog) are sent to us by publishers, authors or downloaded from Netgalley. .This is a very common practice.  I never take payments for these reviews and all the reviews on this site are our own thoughts and feelings and are not influenced.
Posted by A Soccer Mom's Book Blog at 5:00 AM