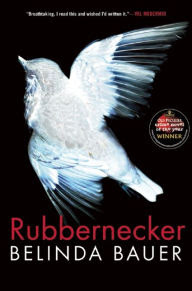 The dead can't speak to us,' Professor Madoc had said.


Because the body Patrick Fort is examining in anatomy class is trying to tell him all kinds of things.


Life is already strange enough for the obsessive Patrick without having to solve a possible murder. Especially when no one believes a crime has even taken place. Now he must stay out of danger long enough to unravel the mystery - while he dissects his own evidence.


But as Patrick learns one truth from a dead man, he discovers there have been many other lies rather closer to home...

Samuel Galen has come out of a coma and is making progress.    Patrick is working on Cadaver #19, which ends up being Samuel Galen.     Patrick becomes focused on finding out why his cadaver died and when his findings do not match up to the death certificate he feels the need to prove that there has been a murder.

Patrick has been diagnosed with Aspergers, which makes his character more interesting.     Belinda Bauer obviously did her homework to find out what exactly that means to a person.   The way that Aspergers affects Patrick makes him sometimes seem rude or standoffish.   Yet, Patrick was not misunderstood.   He was able to make friends and live in the real world.   Sometimes he missed a joke or a slang that was used, but don’t we all miss those sometimes.    I really loved how he never gave up on what he knew had happened.   He did what was right and proved his points.

The story was written perfectly.   There was enough science behind all the findings to make it realistic yet it was written using terms that a non-scientific person would understand.      The attention to details pulled me right in and I could picture what was happening as I was reading.     The characters were well developed and easy to relate to.

I definitely recommend checking out Rubberneck.