A World Elsewhere: An American Woman in Wartime Germany by Sigrid MacRae 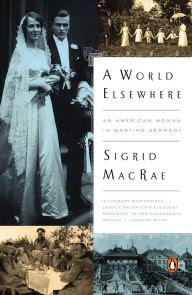 Sigrid MacRae never knew her father, until a trove of letters revealed not only him, but also the singular story of her parents’ intercontinental love affair. While visiting Paris in 1927, her American mother, Aimée, raised in a wealthy Connecticut family, falls in love with a charming, sophisticated Baltic German baron, a penniless exile of the Russian revolution. They marry. But the harsh reality of post World War I Germany is inescapable: a bleak economy and the rise of Hitler quash Heinrich’s diplomatic ambitions, and their struggling family farm north of Berlin drains Aimée’s modest fortune. In 1941, Heinrich volunteers for the Russian front and is killed by a sniper. Widowed, living in a country soon at war with her own, Aimée must fend for herself. With home and family in jeopardy, she and her six young children flee the advancingRussian army in an epic journey, back to the country she thought she’d left behind.

This is the story of Aimee and her marriage to Heinrich and their life together.   While there is a personal side to this story, there is a TON of history.     There were times I felt lost with all the names of towns and places that were discussed.    I am not familiar with much of Germany, Russia, and the surrounding areas.   This definitely worked against me.      I also felt that there were times that too much attention was given to the different towns and locations and the story of Aimee was lost.    The story was there and it was wonderful, there were just times I had to dig a little deeper into the text of the story to find her tale.

I LOVE WWII.    This is my favorite era to read about.  Usually I have read about it from an American participating in the war’s point of view.   The fact that this was told from someone living in Germany was extremely interesting.    To hear how Hitler was able to change the world starting in Germany and how it continued from there was a different perspective for me.     I really enjoyed it.   It was eye opening into all that was going on before the US even joined the war.

I cannot wait to share this book with my fellow WWII readers.   Any history buff should pick up this book.

Praise for A WORLD ELSEWHERE:

“A remarkable and touching book… Although Aimée may not have thought her life was remarkable, her daughter’s book proves otherwise.” —New York Times Book Review

“A riveting book… MacRae wrote the story so objectively that it reads more like a gripping novel than a traditional memoir. The writer did prodigious research…By showing us the warmth and love and concern her parents had for each other—even in the midst of aterrible time—
MacRae has created a classic war story.”—Connecticut Post

As of December 1, 2009, According to The Federal Trade Commission (FTC),  product reviewers on blogs must disclose whether they received products for free or received payment for their review.
The books I review on this site ( A Soccer Mom's Book Blog) are sent to us by publishers, authors or downloaded from Netgalley. .This is a very common practice.  I never take payments for these reviews and all the reviews on this site are our own thoughts and feelings and are not influenced.
Posted by A Soccer Mom's Book Blog at 5:00 AM