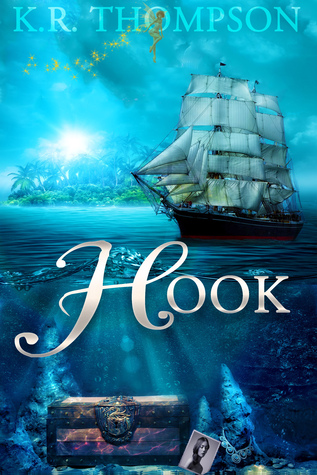 Archie Jameson sat in the dark corners of the print shop, dreaming of adventure.

Today, it found him.

Caught in a chilly October storm, he ducked into a tavern, hoping to escape the rain. What he found, was a room teeming with pirates. Shanghaied by the most elderly of the lot, Archie found himself serving on a ship captained by the fiercest pirate ever to sail the seven seas--the man known as Blackbeard.

Through a series of thrilling twists, Archie finds himself captain of another of Blackbeard's ships, the Jolig Roger. In an attempt to flee danger, his ship becomes lost under stars never before seen.

Determined to save both his crew and the woman he loves, Archie will make decisions that will forever seal his fate.

Discover the untold story of the man who became Captain Hook.

I love fairy tales.   Recently I have been reading quite a few fairy tales twists.   Hook is exactly that.  It is the how of Captain Hook.   This is the story that is not told in the Peter Pan books.   I love how K.R. Thompson kept the bulk of the story true to what is known.    The characters were familiar to me and were great.   Every pirate was developed enough to understand they why they became a pirate.   The Lost Boys were explained in a way that I never considered and Wendy was just entering Neverland when the story was ending.    Thompson showed a side of Peter that I loved.

You know that when you pick up a book and think you know the story, this is that book.   With each chapter I learned things that I did not know and that changed the story.  This story had twist after twist and I loved every minute of it.   The story of Peter Pan is popular and this book turned the story around and gave a totally different view on Neverland.

I definitely recommend Hook to any fairy tale lovers.   It is a shorter story that is guaranteed to entertain.

K.R. Thompson was raised in the Appalachian Mountains. She resides in Bland County with her husband, son, three cats, and an undeterminable amount of chickens.

An avid reader and firm believer in magic, she spends her nights either reading an adventure or writing one.

She still watches for evidence of Bigfoot in the mud of Wolf Creek.