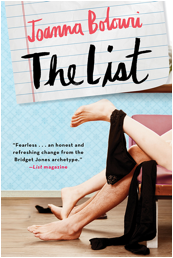 THE LIST is the hilarious debut novel from Scottish comedienne Joanna Bolouri. Phoebe Henderson may be single but she sure doesn't feel fabulous. It's been a year since she found her boyfriend Alex in bed with another woman, and wine-fueled nights of relationship analysis with her best friend Lucy have done nothing to improve her dating situation.

Faced with another year without love, Phoebe confronts her fears and decides to forgo romantic love altogether. She comes up with THE LIST: ten things she's always wanted to do in bed but has never had the courage to try. One year of pleasure, no strings attached. Simple, right? In a chaotic, embarrassing, exhilarating, and ultimately transformational year of self-discovery, Phoebe finds surprises, friendship, confidence, and even love, through good and bad sex.

This is a review that I am not sure how to start.   How much should  I share?  The List is a book that every woman should read.   If you could do anything sexually you wanted what would be on your list?   I blushed, laughed out loud, and shook my head.  I felt like I was going on this journey with her and oh, what a journey it was.    As a married woman, with kids, I shook my head and Phoebe being so promiscuous but loved that she knew what she needed to do and went about whatever mean necessary to get it done.      I laughed at some of the not so successful attempts and cringed at being her in some of the situations.    I blushed at some of the things she wanted to do and the fact that she was sharing this journey with her closest friends.

Phoebe’s story was told diary style.  It was done with truth and feelings.  I felt like I really got to know Phoebe and the secondary characters well.   The quirks and humor were perfect.  Each character in the story was real and relatable.   There was no sensor on Phoebe and her friends, they swore, they laughed, and they talked sex without a filter.

I recommend that every woman buy this book.   It is different and fun.   The funny, romance story is guaranteed to keep you entertained.

"This is a fast-paced and very funny read, told in diary format as Phoebe spends a year seeking pleasure and ends up finding out more about herself than she ever expected to."
—Rebecca Vnuk, Booklist, 2014

"A very naughty but nice read that will have you gasping at Phoebe's antics one minute and laughing out loud the next."
—Abby Clements, author of Vivien's Heavenly Ice Cream Shop

"Sexy, smart and scandalous, The List charts one woman's odyssey through her bedroom blind-spots--and what a ride it is! Funny and frisky, I'd recommend to anyone with a taste for adventure."
—Victoria Fox, author of Temptation Island

“Highly entertaining, heart-warming, with a good dose of smut. A sexy read that will have you wondering about your own list."
—Anna Bell, Don't Tell the Groom

"Raunchy and hilarious . . . you'll be laughing all the way to the beach!"
—The Scottish Sun

ABOUT THE AUTHOR: JOANNA BOLOURI is a writer, blogger, comedien and much older than she once was.   Represented by Kerry Glencorse at Susanna Lea Associates.  Her first novel The List was first published by Quercus in the UK in April 2014 and translation rights have been sold to Turkey, Slovenia, France, Lithuania, Czech Republic, Slovakia, Hungary, Portugal, Germany, Brazil, Croatia and Spain.

She’s currently somewhere in Glasgow working on her second novel I Followed the Rules, to be published by Quercus 2015.