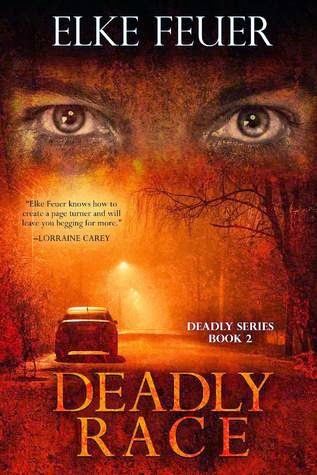 Race car driver Remy Borden likes fast things: bikes, cars, and men. Her plans to become the first woman from the Cayman Islands to race internationally gets sidetracked when she’s injured and pulled from the final race because of a fiery confrontation with another driver.

Life goes from bad to worse when the racetrack owner is killed and she’s suspect number one because his death puts her back in the race. But racing again proves difficult when Dr. Jackson Wilson insists she stop racing until she heals, making her wonder if his ‘doctor’s orders’ don’t have ulterior motives-the racetrack owner was his friend.

She and Jackson search for the truth behind the murder when accidents start happening at the racetrack, and an adoring fan gets too close. Soon the simmering attraction between her and Jackson boils over, forcing her to admit Jackson makes her think of a life beyond racing.

Deadly Race started with a woman race car driver, which I love, (Danica Patrick is from my home town) and continued to keep my attention with murder, mayhem, love, and a stalker.   I was able to put some of the clues together and some of the clues led me the wrong direction, keeping me guessing.   I was very wrong about who the stalker was and that was a good thing.  I guessed who was causing all the problems at the race track and had a good idea who the killer was.    When a book keeps me on my toes and lets me put the clues together to solve the mysteries, it quickly moves to the top of my favorite reads list.

I love that Elke’s books take place in the Cayman Islands.    The speech is fun and different from what I am use to and is so real that I can actually hear the accents (I hear Jamaican sounding voices).   I do wish there was more descriptions of the surroundings, just for my own enjoyment, but do not feel there is anything to really be gained by adding these extra details.    I was able to picture Remy’s small and comfortable apartment, the hospital where Jackson worked, and Remy’s parent’s house.   The police station was probably my favorite place; only because there were always an interesting person in the background, whether a drunk or someone yelling crazy stories.

This is my second Elke Feuer’s story and I cannot wait for more from her.    I definitely recommend Deadly Race to anyone looking for an adventure to read.

Elke was born and raised on Grand Cayman and lives there with her husband and two kids who keep her on her toes.
She’s a cof­fee­holic, check­list fanatic, and future space explorer. She has a sarcastic/quirky sense of humor and loves meet­ing new people. When not writing, she's helping other writers in Cayman through her organization CayWriters.
The author of For the Love of Jazz and Deadly Bloodlines, book one in her Deadly Series. She stumbled into writing romantic suspense because of her fascination with serial killers, but writes other genres because characters keep telling her their stories and she's a sucker for a crazy story.