Expected publication: May 17th 2022 by Berkley 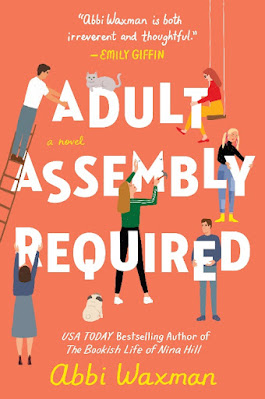 A young woman arrives in Los Angeles determined to start over, and discovers she doesn’t need to leave everything behind after all, from Abbi Waxman, USA Today bestselling author of The Bookish Life of Nina Hill.

When Laura Costello moves to Los Angeles, trying to escape an overprotective family and the haunting memories of a terrible accident, she doesn’t expect to be homeless after a week. (She’s pretty sure she didn’t start that fire — right?) She also doesn't expect to find herself adopted by a rogue bookseller, installed in a lovely but completely illegal boardinghouse, or challenged to save a losing trivia team from ignominy…but that’s what happens. Add a regretful landlady, a gorgeous housemate and an ex-boyfriend determined to put himself back in the running and you’ll see why Laura isn’t really sure she’s cut out for this adulting thing. Luckily for her, her new friends Nina, Polly and Impossibly Handsome Bob aren't sure either, but maybe if they put their heads (and hearts) together they’ll be able to make it work for them.

Meet Abbi Waxman (Taken from her website):  Abbi Waxman was born in England in 1970, the oldest child of two copywriters who never should have been together in the first place. Once her father ran off to buy cigarettes and never came back, her mother began a successful career writing crime fiction. Naturally lazy and disinclined to dress up, Abbi went into advertising, working as a copywriter and then a creative director at various advertising agencies in London and New York. Eventually she quit advertising, had three kids and started writing books, mostly in order to get a moment’s peace.

Abbi lives in Los Angeles with her husband, three kids, three dogs, three cats, a gecko, a snake, five pigeons, four chickens, and two guinea pigs. Every one of these additions made sense at the time, it’s only in retrospect that it seems foolhardy.