The Space Between Sisters by Mary McNear, GIVEAWAY, & EXCERPT

New York Times and USA Today Bestselling author Mary McNear returns to her beloved Butternut Lake in a story where the complicated bonds of sisterhood are tested, long kept secrets are revealed, and love is discovered... all during one unforgettable summer at the lake. 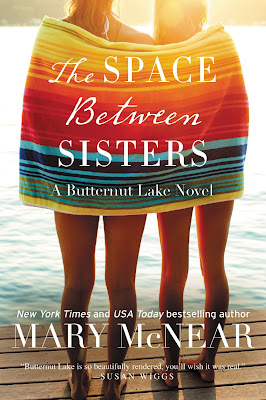 Win and Poppy are two sisters who couldn’t be more different. Win is organized, responsible, and plans her life with care. Poppy is impulsive and undependable, leaving others to pick up the pieces of her life. But despite their differences, they share memories of the idyllic childhood summers they spent together on the shores of Butternut Lake. Now, thirteen years later, Win, recovering from a personal tragedy, has taken refuge on Butternut Lake, settling into a predictable and quiet life.

Then one night, Poppy unexpectedly shows up on her sister’s doorstep with her suitcases, an aging cat named Sasquatch, and a mysterious man in tow. Although Win loves her beautiful sister, she wasn’t expecting her to move in for the summer. At first, they relive the joys of Butternut Lake. But their blissful nostalgia soon gives way to conflict, and painful memories and buried secrets threaten to tear the sisters apart. As the waning days of summer get shorter, past secrets are revealed, new love is found, and the ties between the sisters are tested like never before… all on the serene shores of Butternut Lake.

Pop and Win are as close as sisters can be.   They love, support, and protect each other.   Until their lives take different paths and they are pulled apart.    Pop comes to live with Win, uninvited and as a surprise.    Their lives intertwine again and their relationship is rebuilt.     I love the relationship between these sisters.  I have a sister and she is my best friend.    I can relate to the need to come home to her when things get rough and you need to escape.   I can only hope she would be as accepting and welcoming as Win is to Pop.

The love story part of the book is great.   It is not the main attraction of the book but it is an important part of the story.    Both sisters have their own relationships happening, yet they are together in their worries and caution while developing these relationships.    I enjoyed how they could talk to their men and the respect that was showed throughout the struggles.    Mary McNear did an amazing job developing the relationship and taking things at an easy pace.

I felt like the book started a little slow but it picked up pace about 1/3 of the way through the book.    At that point I could not put the book down and was anxious to find out what would happen and how the sisters would continue to rebuild their friendship and how the other relationships would play out.

Where to buy  THE SPACE BETWEEN SISTERS

New York Times and USA Today bestselling author Mary McNear is a writer living in San Francisco with her husband, two teenage children, and a high-strung, miniscule white dog named Macaroon. She writes her novels in a local donut shop where she sips Diet Pepsi, observes the hubbub of neighborhood life and tries to resist the constant temptation of freshly-made donuts. She bases her novels on a lifetime of summers spent in a small town on a lake in the Northern Midwest.

From THE SPACE BETWEEN SISTERS by Mary McNear. Copyright © 2016 by Mary McNear. Published on June 14, 2016 by William Morrow Paperbacks, an imprint of HarperCollins Publishers. Excerpted by permission.