Book Review for The Villa by Rachel Hawkins

The Villa by  Rachel Hawkins 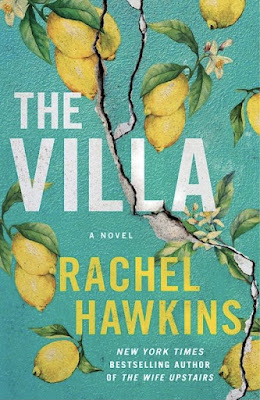 As kids, Emily and Chess were inseparable. But by their 30s, their bond has been strained by the demands of their adult lives. So when Chess suggests a girls trip to Italy, Emily jumps at the chance to reconnect with her best friend.

Villa Aestas in Orvieto is a high-end holiday home now, but in 1974, it was known as Villa Rosato, and rented for the summer by a notorious rock star, Noel Gordon. In an attempt to reignite his creative spark, Noel invites up-and-coming musician, Pierce Sheldon to join him, as well as Pierce’s girlfriend, Mari, and her stepsister, Lara. But he also sets in motion a chain of events that leads to Mari writing one of the greatest horror novels of all time, Lara composing a platinum album––and ends in Pierce’s brutal murder.

As Emily digs into the villa’s complicated history, she begins to think there might be more to the story of that fateful summer in 1974. That perhaps Pierce’s murder wasn’t just a tale of sex, drugs, and rock & roll gone wrong, but that something more sinister might have occurred––and that there might be clues hidden in the now-iconic works that Mari and Lara left behind.

Yet the closer that Emily gets to the truth, the more tension she feels developing between her and Chess. As secrets from the past come to light, equally dangerous betrayals from the present also emerge––and it begins to look like the villa will claim another victim before the summer ends.

Inspired by Fleetwood Mac, the Manson murders, and the infamous summer Percy and Mary Shelley spent with Lord Byron at a Lake Geneva castle––the birthplace of Frankenstein––The Villa welcomes you into its deadly legacy.

My Thoughts:   The Villa is a story of friends, drugs, sex, and music.   It is also a story of researching a tale that is told about the place you are staying and figuring out the rest of the story.  Emily plays the detective, she reads Mari’s book when she arrives at The Villa and decides to rewrite the story, tell the whole story.    I really enjoyed watching her put together her version of the book, the mysteries she found, the clues she discovered all pulled together the 1974 timeline of The Villa.

The current timeline, the timeline of Emily’s visit to the Villa, was a tough story.   Emily has gone to Italy with her “best friend” to escape her cheating husband.   Both Emily and Chess are writing books and think the time away will help them write.  I struggled with their relationship.   Chess was a friend only when she wanted to be and Emily accepted this.  Neither character was one that I was cheering for, I was not invested in their lives or friendships.  The big twist in their friendship, not so surprising.

I wanted more twists and turns, more darkness within The Murder House, more mystery as to what was happening.  I liked the 1974 timeline, Mari’s story, better.   Overall, The Villa was a book that I did not want to put down because I did want to know what was happening but I at the end I was wanted more.  I was not disappointed but I felt like the story could have been a little darker, more gothic.

**Thank you St. Martin’s Press and NetGalley for a copy of the book in exchange for my honest review.