Book Review for Don't Open the Door by Allison Brennan 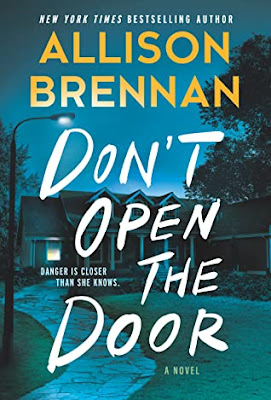 A child is shot while playing video games at home. His mother will stop at nothing to find out who did it—and why.

After their ten-year-old son, Chase, was senselessly murdered, Regan's life unraveled. Her corporate lawyer husband, Grant, blamed the death on Regan’s work as a US marshal. Unable to reconcile their grief, they divorced, and Regan quit her job and moved away.

Now she's back after a voice mail from her former boss Tommy said he had important news to share about Chase’s killing. Regan is stunned to learn Tommy is dead too. When she reaches out to Grant, his panicked reaction raises her suspicions. Then a lawyer with ties to her ex also turns up murdered, and the police make Grant their top suspect.

Unsure of his guilt or innocence, Regan risks everything to find Grant before the police do so she can finally get the answers to all that has haunted her since losing Chase. But the truth is not even close to what she imagines—and now she fears she has no one to trust.

My Thoughts:  Allison Brennan knows how to write a thriller.  I devoured this book and could not wait to see what would be happening next.  The characters were realistic, with real issues and real feelings.  I really enjoyed the interactions between the characters and the history shared between the characters.  For some reason, I did not read the first book in the Regan Merritt Series, but I had no problem jumping right into this book and figuring out what was going on.   I am now going to go back and read the book.

Regan has lived a mother’s worse nightmare.   Her son, Chase, was murdered.   Her marriage did not survive the death.  The man, Tommy, who is investigating the reason Chase was killed has called her to say he has information for her.   I wanted Tommy to be her hero, to figure out why Chase had to die but unfortunately Tommy was killed before he could share what he knew.   Regan returns to Tommy’s home and finds out more than she thought.  The clues were there, the path was laid, and I walked (read) right down it.   I was sure I knew where the author was taking me, but I was not entirely correct.

Don’t Open the Door has cemented Allison Brennan as a must-read author for me.  She is an auto purchase and recommend to everyone.  If you love a good thriller, she is the author for you.

Thank you Harlequin Trade Publishing and NetGalley for a copy of the book in exchange for my honest review.

Meet Allison Brennan (taken from her website):  New York Times and USA
Today bestselling author Allison Brennan believes life is too short to be bored, so she had five children and writes three books a year. Reviewers have called her “a master of suspense” and RT Book Reviews said her books are “mesmerizing” and “complex.” She’s been nominated for multiple awards, including the Thriller, RWA’s Best Romantic Suspense (five times), and twice won the Daphne du Maurier award. She lives in Arizona with her family and assorted pets.
Posted by A Soccer Mom's Book Blog at 5:00 AM