Book Review for City Under One Roof by Iris Yamashita

City Under One Roof by Iris Yamashita 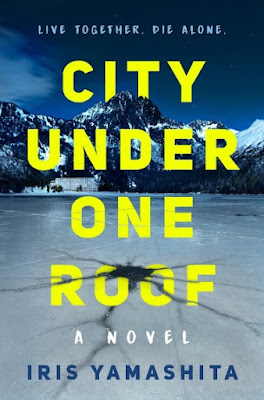 Taken from Goodreads:  A stranded detective tries to solve a murder in a tiny Alaskan town where everyone lives in a single high-rise building, in this gripping debut by an Academy Award–nominated screenwriter.

When a local teenager discovers a severed hand and foot washed up on the shore of the small town of Point Mettier, Alaska, Cara Kennedy is on the case. A detective from Anchorage, she has her own motives for investigating the possible murder in this isolated place, which can be accessed only by a tunnel.

After a blizzard causes the tunnel to close indefinitely, Cara is stuck among the odd and suspicious residents of the town—all 205 of whom live in the same high-rise building and are as icy as the weather. Cara teams up with Point Mettier police officer Joe Barkowski, but before long the investigation is upended by fearsome gang members from a nearby native village.

Iris Yamashita  Haunted by her past, Cara soon discovers that everyone in this town has something to hide. Will she be able to unravel their secrets before she unravels?"

My Thoughts:   City Under One Roof is not a fast-paced thriller like most thrillers I have read.  The story moves at a steady pace with attention to details and developed characters.   At no time did I want to stop reading but I did find myself skimming some of the more detailed parts just to get to the action.   The unique setting, at least for me, of a small town in Alaska had me enjoying the setting and picturing the location as I read.

The mystery of who the severed body parts belonged to and who severed them had me guessing as the story went on.    I was sure that I would be able to figure it all out and was a bit surprised when the rest of the story was given.   For me, when I do not quite figure it all out before it is exposed, I feel like it was a good book.  I like to be surprised and I like that the twists and the turns had me not quite getting it right.

I will rate City Under One Roof a high 3.5 star book, which I will round up to 4.

Thank you Berkley for a copy of the book in exchange for my honest review.

About the author:  Iris Yamashita is an Academy Award–nominated screenwriter for the movie Letters from Iwo Jima. She has been working in Hollywood for fifteen years developing material for both film and streaming, has taught screenwriting at UCLA, and is an advocate of women and diversity in the entertainment industry. She has also been a judge and mentor for various film and writing programs, and lives in California.

Praise for Iris Yamashita’s CITY UNDER ONE ROOF

“Northern Exposure meets Dexter in this clever thriller in which an isolated community is rocked by a twisted murder, increasingly dark secrets and the terrifying knowledge that the people they always thought they knew are now the ones they should fear the most.”

“Iris Yamashita blasts into the world of crime fiction by doing something spectacular: introducing us to a totally unique location and sub-culture.  A compulsive page-turner that’s both atmospheric and claustrophobic at the same time.”

“CITY UNDER ONE ROOF is a gripping, unsettling and oppressive thriller that welcomes a wonderful new talent to the genre. Prepare to be quickly immersed in this dark and moody murder mystery.”

“Electric and fast-paced, this debut thriller is a testament to Yamashita’s skills as a storyteller. There’s no escape from the isolated Alaska setting for either the murder investigator or the reader. I fell down the rabbit hole and couldn’t come out until I read the final page.”

“Iris Yamashita delivers! Compelling characters, clever plot twists, and a story that will chill you to your bones. CITY UNDER ONE ROOF is a must-read thriller.”

“A well-crafted novel, told through the eyes of three very different women, with a wonderfully claustrophobic and atmospheric background.”